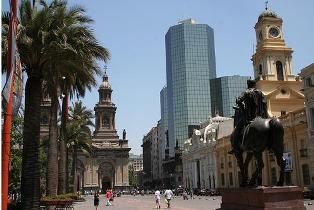 Want to learn more about modern Chilean history? Read on for a comprehensive overview of the recent major events as unfolded in Chile…

The Meat Massacre of 1904 in Santiago marks the beginning of the modern history of Chile. This was a revolt staged by the common man against the rising prices of everyday use commodities. In response to the revolt the government sent its army causing hundreds of deaths of unarmed civilians in street clashes.

In 1907 the Massacre of the Escuela Santa Maria de Iquique took place. This move by the government crushed all attempts of gaining civil rights by the common man.

Severe political agitation took place during the time period prior to the adoption of the Chilean Constitution of 1925. This was a step down from the authoritarian constitution of 1833. The main change was the introduction of graduated income tax.

In 1927 Carlos del Campo managed to come to power through a bloodless coup. He ruled on the pattern of Mussolini and two years following his rule Chile experienced its first economic crash. As a result Carlos del Campo had to step down paving way for Arturo Alessandri Palma to come into power.

By 1946 Chile had a new president brought into power with the help of a broad alliance of parties. It was under his rule that the Law of Defense of Democracy was introduced under pressure from the U.S. A surprising turnover brings Carlos Ibanez del Campo back into power through democratic means in 1952.

Chile was shaken to the core in 1960 as it was struck with the world’s largest earthquake. Four years later Chile greets a new president named Frei Montalva promising a revolution in liberty. By 1970 he was replaced by Salvador Allende who was allied with the leftists which naturally brought him the displeasure of the U.S.

The president is overthrown and killed during an armed coup initiated by Augusto Pinochet who becomes the supreme leader of Chile. Repression of the leftists along with his other opponents resulted in more than 3,000 deaths and more than 130,000 arrested.

In 1978 Chile almost went to war with Argentina over the Beagle Channel. A drastic shift in economic policy based on the Chicago School of neoliberalism is introduced by the military government. Pinochet finally fell from power paving way for Patricio Aylwin to take office in 1990. This marked Chile’s transition towards democracy.

A new president, Frei Ruiz Tagle is elected four years later. The following years saw the economy of Chile crumbling to the ground as it suffers massive blows due to the economic melt down. The second round of voting began in 2002 and brought Joasquin Lavin from the right wing becoming president.

In 2006 however leadership once again changed hand as Michele Bachelet, a socialist leader wins the elections. The results of the elections saw more than 790,000 students coming out on the streets in protest.