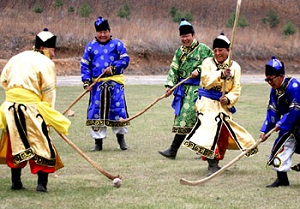 Wherever humans live in community together, there are games and sports, whether recognized as contests or simply shared physical activities. Keeping fit and having fun have always had a place in human history, and ancient China was no different. Many of the games and sports played in ancient China are remarkably similar to various Olympic events of the modern era …

The Role of Sports in Daily Life

For those who lived in ancient times, unless they happened to be royalty, some level of fitness was necessary to daily life. Even after the era of hunter-gatherers, agriculture was remarkably physically intensive. And there was a certain amount of time not spent working, and sports often filled the need for entertainment as well. Even as far back as the Paleolithic period, hunter-gatherers invented tools and recognized the benefits of physical strength and stamina, and many of these activities became the basis for many ancient and modern sports like track and field events and swimming. The ubiquity of such activities in cultures worldwide indicate that it is an integral part of human nature to match physical skills with others. As far back as the Xia era of the 21st to 16th century BCE, all seats of learning included the teaching of martial arts, because physical fitness was recognized as a necessary part of overall education and personal excellence.

The Role of Sport in Military Training

Ancient cultures recognized the value of sport in the development of the skills of the warrior, whether those sports used weapons (or facsimiles). Indeed an ancient rebel tribe trained by fighting with cow horns attached to the head. These techniques evolved into forms of wrestling that are still practiced today. Military training in ancient China included various sports like horse racing, swimming, stone throwing, and fencing.

During the Spring and Autumn period in ancient Chinese history, which was the time covered in Confucius’ book The Spring and Autumn Annals, a high ranking military official named Guan Zhong had swimming pools built and even gave prizes to his top swimmers, which he called “water troops.” An ancient trophy of sorts, a copper pot excavated from this time period was inscribed with a “battle” or competition in water.

The Era of Confucius

Confucius (551-479 BCE) recognized the place of physical activity in overall education. He was a well-rounded athlete himself, skilled in hunting, fishing, hill climbing, and archery. The educational system he used with his 3,000 pupils consisted of “six arts,” consisting of writing, mathematics, charioteering, music, rituals, and archery. The category “rituals” referred to what today might be called good sportsmanship, or playing by the rules.

While the Olympic movement in ancient Greece took place during the time from the Zhou Dynasty of roughly 770 to 256 BCE to the Jin Dynasty of 240 to 265 CE. Ancient China did not have any sort of sporting relationship with Greece, even though the two cultures traded on the Silk Road which connected east to west from the time of 200 and 100 BCE.

The Effects of Ancient Sport in Modern Times

Ancient Chinese culture emphasized different types of physical education for different ages. For example, one ancient Chinese book of rites prescribed the learning of civilian dances at the age of 13, martial dances at the age of 15, and archery at older ages. Sports held a vital role in ancient China’s educational system, and some believe the long history of sport in China still has an influence on China’s ready embrace of the modern Olympic Games.