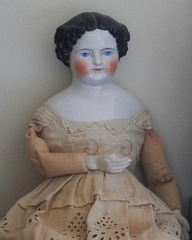 Interested in the antique china doll? Find out what makes these collectable porcelain dolls special…

Origins of the china doll

If the antique china doll is not Chinese then where is it from? Historical records show that Germany, Denmark and France are the countries where this culture first developed during the 1800s. It took about a century for these dolls to come under mass production which happened at the hands of a German doll manufacturer. Initially the manufacturer first started mass producing the heads, arms and legs of these porcelain dolls.

These body parts would then be exported in pieces in large quantities. On their arrival the heads, arms and legs would be joined to a body made using kidskin or wood and then resold in the market. One of the most striking features of these antique china dolls were the painted feet which were made to look like boots and stockings. The heads of the dolls were made to sport popular hairstyles of that time.

Growth of the china doll culture

Up until the mid 1800s one could only find china dolls depicted as adults. The French designer Emil Louis Jumeau was the first man to produce the French Bebe as a totally different trend. These dolls had delicate faces and were extremely beautiful. Along with this they sported the finest fashions in dressing popular amongst the elite of the day.

Although the above mentioned designer introduced the creative concept of the French Bebe, Casimri Bru is the main man credited for producing truly artistic china dolls. Bru dolls, as they came to be known became one of the top notch luxury items which only the extremely wealthy people of the time could afford.

Up until a decade before the 1900s there were a very limited number of companies involved in the production of china doll heads. French china dolls were considered to be top of the line due to their artistry and use of fine quality materials. Their German counterparts however, soon over took them due to their affordability although they were of a lower quality. The affordability factor however made them more accessible to the masses.

These antique china dolls are still popular today. Many enthusiasts love to add an antique china doll to their collection of display items. Interested individuals will be able to find china dolls of adults, youngsters and babies in the market. These dolls are limited in number so as to retain their exclusiveness. Since they are collectable items each china doll has a specific serial number and you even get a certificate of authenticity with them. The china doll of today still maintains its characteristic swivel head and blue glass paperweight eyes making it a valuable addition to any collector’s display.