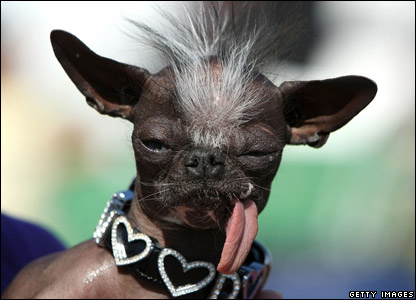 In the good old days dogs were kept by people to serve some practical purpose. Most commonly dogs were used to serve as guards on estates and farms or as helpers during hunting expeditions. With the passage of time however people started adopting dogs for the sheer purpose of companionship. This trend kept gaining currency and many unique breeds were thus being bred and maintained so as to serve as companion pets.

In recent years the trend of keeping pet dogs has reached new heights. Dogs from the toy dog category are today used as a means of making a fashion statement. The Chinese crested is one amongst the many small sized dogs that is considered to be quite a show dog. The development of the miniature dog known as the Chihuahua revolutionized the concept of fashion dogs.

As it is the Chinese crested dog was much loved for its unique looks and character and when it was mixed and bred with the Chihuahua a truly unique creature came into being. The mix has actually won a special dog award not because it’s remarkably cute or pretty rather because of its ugly face. That’s right the Chinese Crested Chihuahua was crowned the ugliest dog in the world. Ironically the owner of the particular dog that won this award was quite proud of the ugly pup for getting him this fame.

The Chinese Crested Chihuahua is available in a number of colors. The Chihuahua mix is produced from the hairless variety of the crested dog. It however has a Mohawk style puff of hair on its head that consists of long and silky hair. This gives the dog a unique look and adds to the character as well. The Chinese crested Chihuahua looks like a dog out of some science fiction movie due to its unique looks.

Although this particular mix has won the ugliest dog in the world award it is still loved by many dog lovers who consider it to be extremely cute. This is not something strange because every fashion has its extreme and it is no different in the world of show dogs. Ugly dog competitions are held every year in many different parts of the world. The Chinese crested is always a major contender in these competitions. With the Chihuahua mix however it stood unparalleled in its ugliness and swept the top position from the rest of its competitors.

Some of the features that contribute to the unique looks of the dog are its Mohawk hairstyle and big bulging bug like eyes. The longer than proportionate tongue that keeps wagging is another unique feature of this ugly dog. The particular dog that won the ugliest dog award was so ugly that the breeder had made up his mind to put an end to it before it was bought by the person under whose ownership the dog won the award.