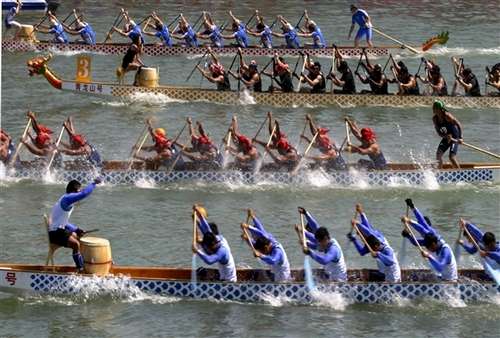 Want to learn about traditional boat racing in China? Find out about the ancient dragon boat race and how it has managed to become a world wide sport

The dragon boat race is an ancient ritual that was practiced in China and has now gained world wide popularity. In China the race goes by the name of Duan Wu Jie but the world at large recognizes it as a formalized sport. In fact it is one of the oldest forms of organized sports known to mankind.

The special event takes place in the fifth month of the Chinese lunar calendar. But dragon boat racing is conducted all around the world at different times of the year as a sport. There are many different stories regarding the origins of this unique tradition in China that gave way to a world wide trend.

One of the stories has to do with the patriot poet of China Qu Yuan. It is believed that the dragon boat race festival was held in honor of this poet. It is one amongst the many deeply rooted elements associated with dragon boat racing in China.

The historical records however show us that the sport was actually developed before the time of the poet. There are many suggestions regarding the development of the sport but the more interesting element is to see how the sport gradually evolved into what it has become today.

The evolution of the race

In the good old days dragon boat racing was full of fierce competition. The race actually bared resemblance with the modern day video game road rash where you thrash your opponents in a race using all sorts of weapons. The opposing teams in the dragon boat race would use bamboo sticks to knock each other off their respective boats. They would also shower each other with stones with the aim of throwing over their opponents into the water.

The team that did fall into the water was left to its fate. No opposing team would extend their help to the drowning people. This was considered to be by the will of the dragon and the team that managed to stay on board was declared the winner.

The modern day version of the sport however is free from the violent acts that were initially a part of dragon boat racing. If there is anything that has been maintained it is the dragon adornments on the boat and the way that the boat is sailed on the water ways.

The unique sport has toned down with regards to its violent nature and is now a colorful and intense sporting competition. No longer is this sport confined to the boundaries of China, rather it is conducted in different places around the world.