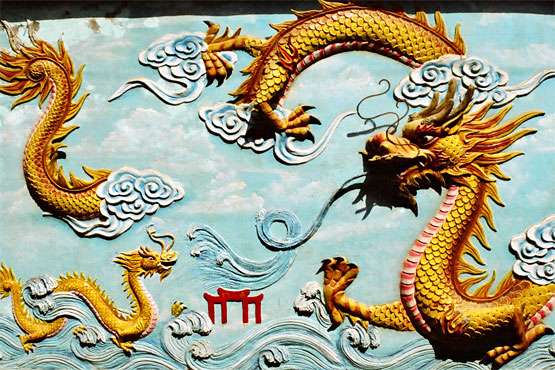 Find out about the different meanings that the classic Chinese dragon with clouds composition has.

The dragon was taken as a symbol of cosmic Chi energy in ancient Chinese culture. From all the good fortune symbols in China the dragon is by far considered to be the most potent of them all. The dragon is also one amongst the four creatures used to represent direction. The image of the dragon is closely associated with new beginnings.

The ancients of China attributed various powers to the mythical beast. One of these powers was that they believed that the dragon caused the clouds to rain. In this way he would let the parched lands quench their thirst and the farmers would rejoice and hold the dragon in high reverence. They would often hold festivals and ceremonies in order to please the dragon with the belief that the dragon would then cause it to rain abundantly upon their farm lands.

The sight of a dragon soaring amongst the clouds is a common feature amongst the collection of Chinese paintings that have taken the dragon as a theme. Indeed it is one of the all time classic compositions that is part of the fine collection. Just like each dragon painting has its own meaning and significance these paintings too have a meaning of their own.

Different Interpretations of the Composition

Clouds in general have served as the transport vehicle for those up in the heavens according to popular Chinese belief. Clouds are often referred to as being the symbol of “celestial mobility” so as to say. The use of clouds for the purpose of transport up in the skies has been part of many Chinese legends about their gods and other immortal creatures.

There is however another meaning that the depiction of clouds takes on. According to popular Chinese belief they are taken as a symbol of good luck. The natural evolution of this concept is related to the clouds brining rain that would benefit the growth of crops for farmers. China being an agricultural country throughout the course of history was heavily dependent on rainfall for the successful survival of its people. Clouds were naturally considered to be bringers of good news.

The depiction of the dragon with the clouds combines two of the most potent good fortune symbols of Chinese history. The development of this combination has clear links with the agriculture culture of the country as the dragon was believed to be the bringer of rain and the clouds were the natural carriers of rain. Hence we find the agricultural activity to be at the center of the development of this theme.

There is another meaning that the dragon image with clouds has taken on over the years. This is a more modern interpretation based on the physical appearance of the dragon soaring through the clouds. Many people conceive this composition to be representing freedom. Although there is no historical evidence for the Chinese dragon paintings with clouds to carry such a meaning it has gained popularity in the West.