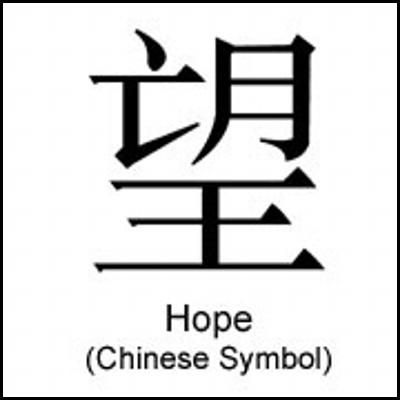 The Chinese symbol of hope is widely used in different forms of art today. Find out about the origins of the symbol and the diverse art work that revolves around it.

The world of Chinese symbols is an extensive labyrinth of more than 80,000 symbols. Although many of them are not in practical use today the collection of symbols in such volumes is nowhere to be found in any other culture.

What is even more interesting is the fact that these symbols were created a very long time ago and have undergone very little modification since then. Furthermore these ancient Chinese symbols are today more popular than ever and that too on a global level.

The popularity of Chinese symbols has come about as a result of the publicity that they have received through the mass media. With Chinese martial arts movies and the likes the western youth has developed a taste for Chinese symbols which were often featured as tattoos, paintings and other works of art.

Hope for the best

A range of Chinese symbols with positive meanings have gained particular popularity in today’s times. The Chinese hope symbol is one amongst the many that are abundantly being used in different forms of art. As it is hope is something that we all do. What we hope for may be subject to individuality but all of us generally hope for the best.

The Chinese symbol for hope has a rather mysterious physical appearance. Since Chinese symbols were painted using brushes in the initial years, one can see the beauty of the strokes that the Chinese hope symbol has to display.

The evolution of most of the simplified Chinese symbols that are used today comes from the attempts of ancient civilizations to capture real life scenarios. These scenarios were abstracted and simplified in order to convert them into solid symbols representing the entire idea over time.

Then there is an extensive collection of art work that makes use of the Chinese hope symbols in different ways. The art work includes the work of ancient Chinese painters and calligraphers who produced amazing works of art that displayed their fine skills and mastery over the art form.

The most popular use of Chinese hope symbols is in the form of calligraphic art. Since this is the true art of Chinese symbols it is the one that deserves to be given the highest credit.

The art of Chinese calligraphy holds great importance in the culture of the region and people still continue to decorate their homes and offices with Chinese calligraphic art featuring the hope symbol amongst others.

China
Discover the brilliance of Chinese calligraphy symbols, their history and their usage in today’s