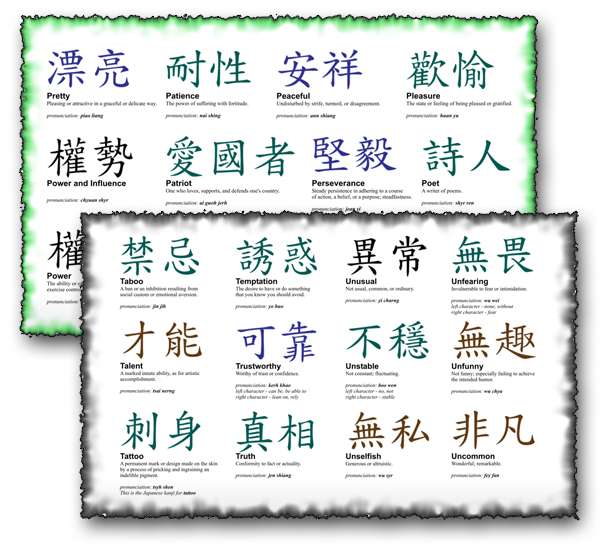 Is the Kanji script originally from China or Japan? Find out the truth about Chinese kanji symbols.

The Kanji script is today associated more so with the country of Japan rather than China although the script was initially developed in China. The modern Japanese logographic writing system was derived by the help of Chinese characters which they adopted into their system. The term kanji translates as Han characters which are Chinese in origin.

So what is the real story behind Chinese kanji symbols and how come they are credited to Japan today? Well, it all started out when Chinese articles started coming into Japan as imports with Han character inscriptions on them.

An example of such as article includes the gold seal. That was handed over by the then emperor of the Han dynasty to the Japanese. How and when the Japanese began to gain command over the use of the Chinese characters remains a mystery.

The most probable story is that the first people to make use of the Chinese Kanji script symbols in Japan were actually Chinese immigrants. Otherwise the Japanese had no real means of understanding or comprehending and even learning the Chinese script.

With the passage of time the ties between the two countries became stronger. There was a constant need of written documentation that was to be transferred between both the countries. Hence a formal body of people known as the fuhito was set up which was trained to handle the documents written in the Chinese script. This paved the way for the acceptance of the Chinese Kanji script in Japan.

How the Kanji script evolved

At the time when the Chinese Kanji script was introduced in Japan, the country lacked any writing system of its own. Starting out with the Chinese system the country slowly gave shape to its own writing system. Which involved making use of Chinese text with some restructuring according to Japanese grammar.

Use of Kanji symbols

The use of Kanji symbols is still far greater in China as compared to in Japan. Contrary to popular belief the kanji script used in both the countries are not exactly the same. Although they may look quite similar the Chinese kanji symbols are quite different with regards to their structure.

The difference between the Chinese and Japanese script also extends into the way that they are read. As mentioned above the Chinese would treat the kanji characters as entire symbols whereas the Japanese would read them according to their phonetic value.

In modern times Chinese kanji symbols have become famous as interesting design elements. One can find many decoration items and fashion accessories that make use of the Chinese kanji script because it has a universally appealing look that exemplifies simplicity, harmony and balance.

China 0 34
Fuzhou is the capital city of the Fujian Province. It is named after Mount

China 0 39
Beijing, the capital city of China, is the heart of the country’s economy and

Chinese Calligraphy Symbols
China
Discover the brilliance of Chinese calligraphy symbols, their history and their usage in today’s
0 13088

Chinese Family Symbols
China
The Chinese symbols for family occupy a special place in their culture. Find out
0 5034

Rare Argentina Stamps
Argentina
Interested in rare Argentinian stamps? Want to know which stamps from Argentina are most
0 4774

Ancient China Social Classes
China
Interested in the social structure of ancient Chinese? Want to know more about the
0 2820