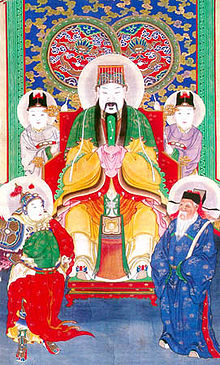 Want to know about the Chinese king of heaven? Read on for facts & information on one of the most important characters in Chinese mythology.

More popularly known as the Jade emperor, the Chinese king of Heaven is considered to be a mythical character that rules over Heaven and all the realms of existence that lie below. According to Taoist mythology the king of Heaven rules over man and hell as well and as such he is considered to be one of the most important Gods in Chinese tradition.

The king of heaven goes by many names. The commoners call upon him as the Heavenly Godfather, The Pure August Jade Emperor, the Xuanling High Sovereign, August Personage of Jade, Ancient Buddha and Central August spirit exalted.

Origins of the king of Heaven

Initially the king was actually a crown prince to the kingdom of Pure Felicity and the Majestic Heavenly Lights and Ornaments. It is believed that the entire kingdom of heaven shone with bright light upon his birth. During his youth he was known to be a wise, intelligent and kind natured individual. He ascended to the throne upon the death of his father.

The king was renowned for his eagerness to give everybody a peaceful environment where they would find contentment. It is believed that he gained golden immortality after he embarked on a project to cultivate Tao on the Bright and Fragrant Cliff. It is at this moment that the king of Heaven officially became the Jade emperor.

The rise to power

During his days as a mortal he roamed the Earth in order to help men cope with the dangers that they faced from demons that treaded the earth. He was saddened due to his limited capability which is why he retreated to a cave to develop his Dao.

The Jade emperor was opposed by a powerful demon who had gathered an army of his own in order to take over heaven. The gods of heaven were not able to curtail the evil demon but the Jade emperor managed to curb the evil demon as they squared off in heaven. This feat of the Jade Emperor earned him the title of King of Heaven as all the other gods, immortals and men were highly indebted to his heroic act.

The representation of the king

The King of heaven has found himself being represented in many different works of art and literature. The most famous of these is perhaps the novel titled “The Journey to the West” by Wu Chengen. Another story attributes a daughter by the name of Chih’nu to the king of heaven. Amongst the many stories surrounding the character of the Jade Emperor is the attribution of the selection of the 12 zodiac animals to the king of heaven.

The Chinese hold a number of religious festivals in awe of the King of Heaven. The ninth day of the first lunar month is considered to be the king’s birthday and the Taoist temples hold the Jade Emperor ritual on this day. The eve of the Chinese New Year is also an important religious day with regards to the Jade Emperor as the Chinese believe he inspects the deeds of people on this day.