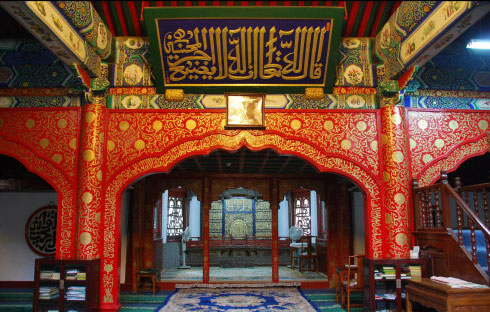 Interested in knowing about Chinese Muslim art? Find out about the major contributions made by Chinese Muslims in the world of art.

Islam has long been present in the Chinese culture. In fact the Muslim population of China is one of the oldest in history dating back to the year 650. The religion came here at the hands of Sa’ad ibn Abi Waqqas who was sent by Caliph Othman bin Affan as an envoy to the then emperor of China, Gaozong. The world of art is one amongst the many domains in which Chinese Muslims have had a considerable amount of influence and have managed to make some great contributions.

Muslim architecture in China is perhaps the most outstanding display of the skill and style of the Muslims of the region. The various mosques that dot the land showcase the sense of aesthetics of the Muslims of China. Examples of Muslim architecture in the form of mosques in China date as far back as the seventh century when the foundations of the very first mosque were raised in the country. The Great Mosque of Xian was built during the Tang dynasty.

The Great Mosque of Xian that stands today was rebuilt in the Qing dynasty. Traditionally the Muslim mosques had a certain flavor that was maintained irrespective of where they stood. In China however Muslim architecture took on a slightly different style as the mosques appeared to be quite different from what was commonly seen. The mosques in China take their inspiration from traditional Chinese architecture and fuse them with the traditional elements of mosques such as minarets. This created unique looking structures the likes of which were not seen anywhere else around the world.

As it is Chinese and Muslim architecture had some basic similarities. For instance the focus on symmetry and the feeling of grandeur are two aspects that are found in the art of both these cultures. The layout of the garden in both these cultures also has something in common and that is the fact that they were composed asymmetrical and maintained a natural flow.

Examples of Muslim architecture are scattered around China as various Muslims explored the country with the intention of spreading the religion. Many of them met death on their way and tombs were created over their graves.

Another major contribution of the Muslims in the world of art was the Sini script that is an Islamic calligraphic script derived from Arabic. Chinese Islamic calligraphy showcased amazing beauty with its thin and tapered effects. It was commonly seen in the mosques and homes of Chinese Muslims.

The Muslims of China also took part in various forms of martial arts at the highest level. The Chinese martial art of Wuhu was developed by the Muslims of the region. These are some of the domains of art in which the Muslims managed to make significant contributions over the years.