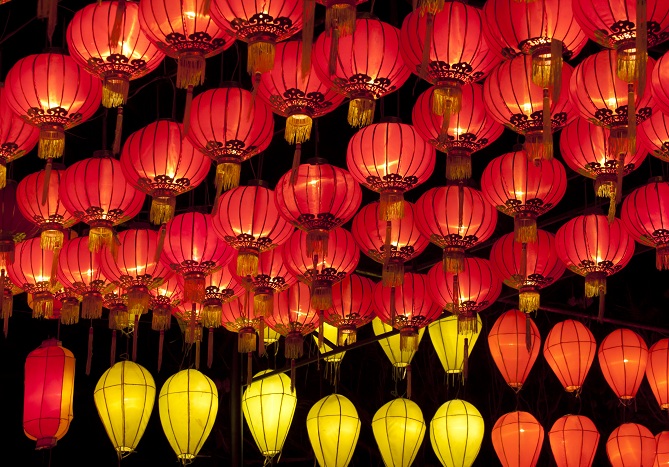 Discover the legendary origins of the lantern festival that is celebrated during the Chinese New Year.

The lantern is one of the most prominent symbols of the Chinese New Year. In fact there is an entire festival known as the Chinese lantern festival celebrated at the time of New Year. In local lingo the festival is known as Yuan Xiao. It gets its name from the first month of the year which is called Yuan where as the second half of the name is what the ancient people used to refer to as night.

The lantern festival is celebrated fifteen days into the New Year on the sighting of the first full moon. The idea is to bring about a cheerful environment as the full moon shines bright in the sky and the masses of Chinese people gather at the place of the festival holding up colorful lanterns creating a completely lit up environment.

There are many intricacies involved with Chinese lanterns. These are no ordinary lanterns rather they can be an extremely engaging item once you begin to indulge in the puzzles that are often featured on the lanterns. The eating of glutinous rice balls also goes along with the lantern celebrations which are shared amongst friends and families.

Origins of the Lantern Tradition

As is the case with many other traditional practices of China you will find a number of myths concerning the lantern New Year tradition. The most popular legend is associated with the worship of a God known as Taiyi who was believed to be the ruler over the heavens in ancient times.

Being the god of heaven it was believed that he controlled the entire fortune of the human world. The power to inflict punishment through natural disasters or medical epidemics was attributed to this god. The emperor who first started the tradition of holding a ceremony to please Taiyi was Qinshihuang. The ceremonies were held in order to gain the good pleasure of Taiyi and avoid the risk of natural disasters.

With time the ceremony gained currency and was highly patronized during the Han dynasty. In fact it was during the rule of emperor Wudi that the event became one of the most important ceremonies in China which would go on for the entire night.

There is however another side to the story that claims the tradition actually innovated under Taoist influence. The Tianguan is a Taoist deity believed to be responsible for fortune and good luck and had a special penchant for Chinese entertainment. So the Chinese people took to the streets performing all sorts of entertainment services to please Tianguan.

There is yet another tell tale about the origins of the lantern festival that give the credit of the discovery to Emperor Mingdi. Under this story the emperor was influenced by Buddhism and a dream that he had which eventually led him to select the 15th day of the Chinese New Year as a day of lighting lanterns.

Irrespective of which of the legends are true the fact remains that the lantern festival is a prominent part of the Chinese New Year celebrations. Especially interesting are the decorative lanterns with different traditional Chinese motifs.