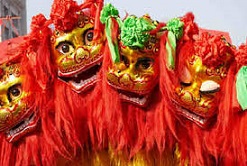 The lion is a prominent symbol of the Chinese New Year. Get some insight into the ancient tradition of the lion dance performed at the welcoming of the New Year.

The way the Chinese welcome every New Year turns the country into a cornucopia of festivities celebrating ancient traditions with happiness and a hope for prosperity in the coming year. The forces of culture are in full bloom during the New Year season.

The New Year season is by far the most highly anticipated holiday season of the year. This is largely due to the wide range of colorful traditional activities that take place during this time. There are many symbolic celebrations that are brought out into the streets from the library of ancient Chinese traditions. Amongst other prominent symbols of the Chinese New Year is the lion which is present in a very unique and intriguing form during the New Year celebrations.

Legend of the lion

The various stories attributed to the lion dance are full of mystery and fantasy but lack any real historical documentation. One of the stories says that a lion suddenly appeared in a village and intended on causing harm to the locals. Then came a kung fu expert out of nowhere and engaged in combat with the lion in the forest. Eventually the lion was killed in the forest. The lion dance was thus innovated as a means of celebrating the victory over the beast.

The other telling tale is associated with the King Ching of the Ching Dynasty of China. Apparently he saw the whole lion dance ceremony in his dream and on his waking up orchestrated the whole performance by making his guards do the dance for him.

The lion dance is a major attraction

The lion itself is taken as a symbol of happiness and joy despite the various legendary origins of the dance. The dance is performed by several teams throughout the New Year festive season starting from the fourth day going all the way till the night of the first full moon.

Different groups have come up with their own variations of the lion dance that adds diversity to this age old tradition. They vary with regards to the construction of the lion and the styling and color that they use. The ritual dance also varies from group to group and region to region.