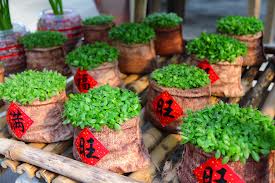 Find out about the fine selection of plants associated with the Chinese New Year and the symbolism that they are meant to carry.

The Chinese New Year frenzy brings about great business for the local nurseries in China. This is because different flowers and plants that are part of the traditional decorations of New Years are in great demand during the season. Hence we find the local nurseries stocking up on the popular plants of the season and coming up with all sorts of flower compositions to cash in on the traditions.

Unlike the Christmas tree which is just one species of tree available in different sizes the Chinese have a fine selection of plants that are used as symbolic decoration items during the New Year season. No home is considered to be ready for welcoming the New Year without the addition of some of the plants on the list.

The popular plants of the season

Amongst the fine selection of Chinese New Year plants is the Pussy Willow. Known more popularly as the Yin Liu in the Mandarin language this is one of the hottest selling plants of the season. This particular breed of tree is actually found in great abundance in northern Alaska as well as Canada.

The reason why this plant is popular is because it has a certain symbolism to it that makes it part of the New Year celebrations. Since everybody is looking forward to prosperity in the New Year the Yin Lou which sounds quite similar to money is taken as a symbol of abundant luck and wealth with which the locals decorate their homes.

Another hot seller during the season is the Zamioculcus zamiifolia. This unique plant is known for its circular shaped leaves that are taken as a symbolic representation of the gold coins that were used in China during the olden days.

The plant is referred to as the Jin Qian Shu because of its resemblance to the old gold coins. Hence this particular plant is considered to be the money tree which brings you good fortune if it flowers in your home according to Chinese tradition.

The Dracaena is another unique plant that is part of the collection of Chinese New Year plants. This is a rather interesting looking plant as it resembles a pineapple. The reason why it is in the list of New Year plants is because its name in the local lingo resembles how you would say good fortune coming your way.

A relatively new addition to the collection is the Chinese Yellow Banana. Although this plant is not as common as the others it is still gaining currency and becoming part of the selection for sure. Since it is a plant that bears fruit it is taken as a symbol of prosperity for the coming year. The fact that it has long lasting flowers also gives it the association with longevity.

The selection of Chinese New Year plants is based on superstition and vivid imagination. All of them are excellent plants that look great in homes irrespective of the meaning that they are supposed to carry.