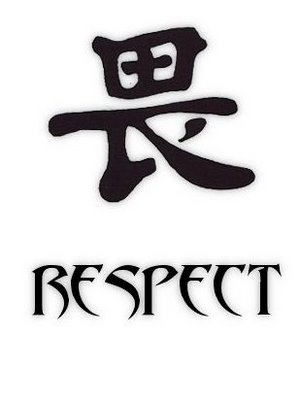 Irrespective of what a Chinese symbol stands for it says a lot more than just the word. The nature of the Chinese writing system is such that it makes use of symbols that are referred to as characters. These characters represent complete ideas and are very beautiful in terms of their visual appearance.

The concept of respect

Courteous behavior towards others is taken as a sign of respect. A display of dignity in actions and holding up the honor of our families in particular and society in general are all considered to be outward actions of respect. Indeed the way you carry yourself shows how much you respect yourself.

These are however all human behaviors. When it comes to symbolic representations of the term respect we find the Chinese symbol to be a popular choice amongst the masses. Although this symbol was derived many years ago it is still used in modern day Chinese language.

The Chinese symbols have managed to remain the same since thousands of years with the exception of certain modifications. Although the construction of the characters remains the same there has been an attempt to simplify the symbol by using lesser strokes. This was done for the sake of practicality as it made reading and especially writing a whole lot easier.

It was actually in Japan where the Chinese characters were simplified. In turn China adopted the simplified characters and currently makes use of them in their writing system. The current respect symbol encompasses a wide range of meanings into one beautiful form. The meanings that the respect symbol can take on include honor, esteem, reverence and nobility.

An interesting thing to notice is that the physical depiction of the Chinese respect symbol is almost the same as it is in the Japanese language as well as the Korean. They also take on the same meanings but have variance amongst them with regards to their meanings.

Hence we find that the respect symbol is a multi-cultural sign that is part of a number of cultures and contains a wide range of concepts. Today we find many skilled artists experimenting with the respect symbol and coming up with new and unique artwork for commercial purposes.