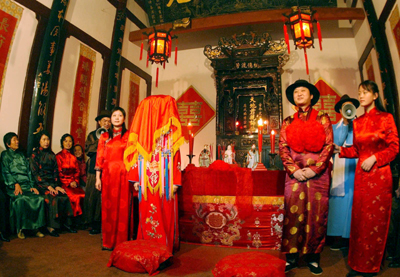 Marriage is a sacred bond but the wedding culture is a traditional norm. The wedding culture in China is very unique and a prominent part of the society. What remains of this culture today is an edited version of the elaborate traditions that used to exist but have been lost with the passage of time. Basically the Chinese wedding culture evolved in honor of the value that the institution of family held in the society.

The entire family takes full part in the wedding right from the initial moment of the proposal. The families choose the betrothal day and arrange a formal meeting between the elders of the two families. On this day the families exchange proposal gifts. After this meeting the good news of the wedding is shared with the rest of the family. The news is accompanied with a special happiness cake that is made for the occasion.

On the other hand the woman’s family prepares an entire list of the dowry which consists of the essential things that come into use on a daily basis. The aim is to facilitate the new couple so that they can start off their new life with ease.

The bride’s house is where the main event takes place. It is set up and decorated before the date of the event. The Chinese make use of vibrant colors with red being used in great abundance. Red banners known as happiness banners are put up along with poems written in Chinese calligraphy celebrating the coming together of two individuals. There are other arts and crafts items such as Chinese papercuts that are used to decorate the home for the wedding reception.

There are various other rituals such as the holding up of a red umbrella over the couple’s head, the throwing of rice, green beans and red beans that are practiced at the event. The Chinese wedding is also full of firecrackers, music with drums and gongs that are meant to jazz up the event and keep the evils spirits away as is the Chinese belief.

The actual wedding ritual requires the couple to kneel thrice which has today been replaced by bowing. Then the family enjoys a tea ceremony which has its own customs and traditions. The families exchange gifts and Li Shi money in red envelopes. After these events the families engage in a feast. The most popularly served items at weddings include fish, chicken, lobster, pigeon and dessert buns. Each of these food items has a symbolic meaning attached to it.

The nature of the precise manner in which the wedding will take place varies from family to family. There are many elaborate rituals and different families celebrate them in varying degrees.