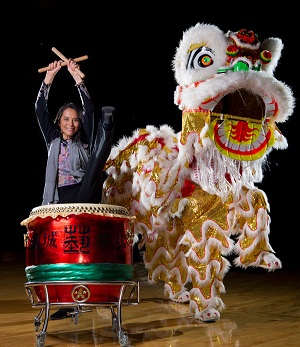 Interested in the music for Chinese dragon dance? Find out about the traditional musical style to which the dragon dances in China.

The Chinese dragon dance is one of the unique aspects of the mysterious Chinese culture. It involves a team of dancers under a dragon costume dancing to live music. It has been a ritual celebratory practice amongst the people of China for thousands of years. It has been kept alive by the Chinese and can be witnessed during the New Year Celebrations in the country and in Chinatowns across the world.

There are many different theories that led to the development of this unique dance. Irrespective of the folklores and legends that surround the discovery of the Chinese dragon dance the fact of the matter is that it is a prominent feature of the Chinese culture.

The Back Beat to the Dragon Dance

The dance is conducted to Southern style Chinese music. This music is basically what directs the movements of the dragon and hence acts as the choreographer of the entire ceremonial performance.

The music used for the Dragon dance makes use of different instruments to generate different sounds that are suggestive of the dancer’s movements. The use of cymbals and other instruments creates an emotional sound-scape that acts as a narrative of the dance performance. The music for the dragon dance is primarily based on percussions and this form of music has been present in the Chinese culture for thousands of years.

The Use of Musical Instruments

The music is generated using a wide variety of drums and drum sounds. The style of music is associated with the Southern part of China. Traditionally the Kung fu specialists of China would be the ones conducting the dragon dance as well as playing the music.

Amongst the different elements of the music compositions used for the dragon dance cymbals and gongs are very important. These two instruments are characteristic of traditional southern style music and are used to denote emotional twists in the dragon dance.

The music and dance are complimentary to each other. It is important for the dancers to respond to the music and conduct the movements accordingly. For this reason the entire performance is conducted by highly trained professionals including specialist drum artists.

The use of gongs and cymbals revolves around the main drum beat. The interesting thing is that the drum beats go through a series of progressive changes according to the different stages of the dragon dance. Since the dragon dance has an abstract narrative behind it the music is composed in such a manner that it creates the appropriate ambiance at each stage of the performance.

The percussion based music involves a lot of spontaneous improvisation but has a solid backbeat which is maintained at every stage. The percussionists would alter the drum beats and tempo in accordance with the dancers and together the team of musicians and dancers are able to put up a spectacular performance. The dragon dance has been used as a means of entertainment for thousands of years within China. Today it is one of the major tourist attractions which people come to witness from all over the world during the Chinese New Year celebrations.