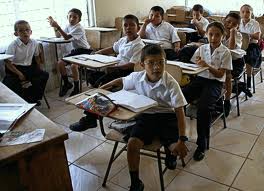 Interested in the Costa Rican education system? Want to know how education in Costa Rica is funded? Our guide gives you the facts & information you want to know.

Costa Rica has arguably the best education system in all of central and possibly South America. Costa Rica was the first country in Central America to make a comprehensive and free national education system available to all its citizens. In fact, the education system in Costa Rica went one step further by making primary education compulsory at least up to the 6th grade; something unusual in a developing country that relies heavily on agriculture. This is because traditionally families like to keep their children at home to work on the farm and tend to the crops and animals.

The education system in Costa Rica respects national and religious holidays and is schools and universities are closed on special days. Among the most widely observed holidays are Easter and Semana Santa which lasts for one week. It is the time when Costa Rican people express their faith through colorful processions held every day for one week before Easter begins. Christmas and New Year’s Eve celebrations are similar to those in the US. Among the most important secular holidays, the Independence Day of Costa Rica is by far the biggest.

The last two decades have seen great improvement the education system in Costa Rica. Since the 1970’s the government has invested nearly 30% of the national budget on primary and secondary education.

Although many rural people in Costa Rica do not continue with full time education past the 6th grade, the government has seen to it that every municipality has its own library with a well equipped selection of books. This allows rural people who are unable to commit further to full time education to at least better themselves through reading about subjects that interest them. However, despite best efforts, here is still a shortage of libraries in Costa Rica and also a shortage of books.

Elementary and secondary schools can be found in every community in Costa Rica whether urban or rural. Education is free for such students although often a nominal annual charge to help pay for school expenses is levied. The education system in Costa Rica consists of primary and secondary stages, before going on to studies at university level. Primary education lasts 6 years whereas secondary education lasts five. Students are required to pass tests on all subjects studied they have studied.  The most significant of these tests are the Bachillerato Tests, which are required to get the high school diploma needed for admission to Universities.

Although the country didn’t have a university until 1940, Costa Rica now has four universities that a re state funded as well as many private universities, whose number has increased dramatically in the last few years, due to the difficulty of being admitted to state-funded, more prestigious universities.