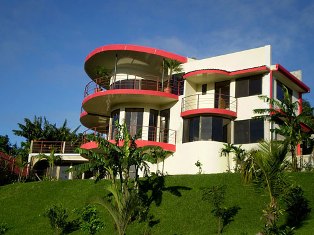 Going on vacation to Grecia Costa Rica? Want to rent a villa or house during your Costa Rica vacation? Our guide gives you facts & information about Grecia house rentals.

Grecia in Costa Rica is a popular tourist destination with visitors from all over the world despite the fact that unlike most other tourist destinations in Costa Rica, Grecia has no beach and is not located anywhere near the sea. Grecia is located northwest of the Costa Rican capital San Jose and is easily accessible by car or bus. While many visitors to Grecia only come here for a couple of days and prefer to stay in a hotel, those who want to spend a longer time here have the option on renting a house or villa here. The natural scenery that can be found in Grecia is breathtakingly beautiful and just the place to visit if you want to feel close to nature. Grecia is situated in a valley surrounded by beautiful mountains on all sides which with their rich and fertile soil ensure lush greenery practically all year long.

There are a several ways one could go about finding a house rental in Grecia Costa Rica. Because it is a relatively small town the local community is tightly knit and everybody seems to know everybody else. You could just try asking around with any locals you meet about the possibility of finding a rental house in Grecia. Some locals may even be willing to move out of their house or a while and rent it to you to make some extra cash. Although this has been done successfully in the past, the approach is one that often takes time and sometimes without any results. The alternative route when looking for house rentals in Grecia Costa Rica is to search through an estate agent. The disadvantages to this route include having to pay a commission to the agent; however, if you are on a strict time schedule and want to find a house rental as soon as possible, this is probably the best option.

Grecia has a relatively small population most of whom work in the agricultural industry. The locals in Grecia are very friendly down to earth people who will usually be welcoming of foreigners. Finding a decent and clean house to rent in Grecia should be no problem; however, if a luxury villa rental is something you are after, then you will not be spoilt for choice here, as Grecia has comparatively few of these in contrast to some of the busier coastal towns in Costa Rica.

The layout of your rental house in Grecia Costa Rica will be more or less the same as that of a North American house will all modern conveniences. However, due to the relatively cool climate that Grecia enjoys for most of the year, your rental house will most likely not have air conditioning as there is no need for it.