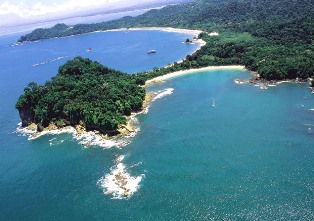 Going on vacation to Costa Rica? Want to visit Manuel Antonio national park? Want to know where the best tours are and what to do there? Our guide gives you the facts & information you want to know.

Costa Rica is one of the most popular tourist destinations in Central and South America. Every year millions of tourists from the US, Canada and all over the world make their way to the sunny shores of Costa Rica to enjoy a couple of weeks on the golden beaches. However, no less popular in Costa Rica, are the rainforests, national parks and protected nature reserves which make up more than one fourth of Costa Rica’s entire land mass. As the world’s awareness increases about environmental issues such as global warming, so to is the level on interest in eco tours and vacations to the national parks and rainforests of Costa Rica. One of the most popular national parks in Costa Rica is Manuel Antonio, named after a famous Spanish conqueror.

Although there are several national parks in Costa Rica, Manuel Antonio is one of the biggest and most popular for a variety of reasons. This park is located on the western shores of Costa Rica overlooking the Pacific Ocean and the nearest town of note is Quepos which is north of Manuel Antonio. Although small in comparison to some of the other national parks in Costa Rica, Manuel Antonio is prized for it’s beautiful and pristine beaches which are sandwiched between the Pacific Ocean and a backdrop or green cliffs and dense jungle with a vast array of wildlife. In addition to there being over 200 species of bird there are many rare types of animal including otters, pacas, marmosets and sloths. Although Manuel Antonio National Park is open to the public, due to heavy demand by tourists, entrance numbers often have to be limited in the interest of preserving the delicate ecosystem and not scaring away the animals through over exposure to humans.

The Manuel Antonio National Park entrance fee is US$6 per person. Children under 12 gain entrance free. Opening hours are from 7am until 4pm and the park is closed to the public on Mondays.

Manuel Antonio National Park is easily accessible by road and is well connected to the national highway network. It takes between 3-4 hours to drive to Manuel Antonio from the capital San Jose and the condition of the roads is generally good. There is also a bus service that operates daily from San Jose to Manuel Antonio. At the time of writing, there were three daily services in modern air conditioned buses departing from the Coca Cola bus terminal in San Jose.

Travel to the area is easy and can be done in a number of different ways. Regularly scheduled air service is available through Sansa Airlines, the flight takes 20 minutes. It is a three and a half hour or more, drive by car or bus from San José depending on the weather and traffic.