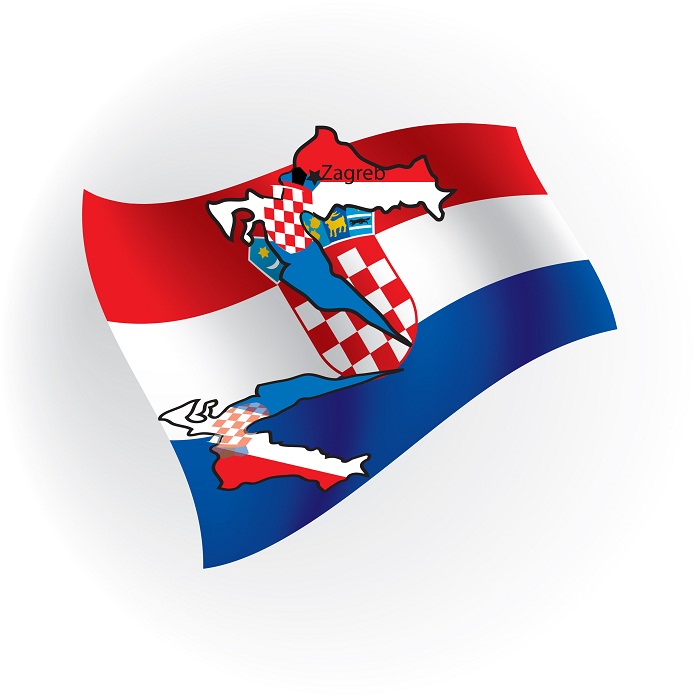 Want to know more about the flag of Croatia? Then read on!

The flag of Croatia was formally adopted in 1991 following the declaration of Croatia’s independence.  Germany was the first country to acknowledge Croatia, closely followed by the rest of the world in early 1992. At this point, the flag of Croatia became known internationally and now sits as one of the flags flying outside the UN buildings.

This flag is used as the civil flag, the state flag and finally the war flag

The Croatia flag is essentially composed of three horizontal stripes of equal size in red, white and blue respectively. The choice of colours stems from their traditional pan-Slav usage and their use on the Croatia flag (whilst Croatia was still part of Yugoslavia) since 1848. Croatia was under Hungarian rule in 1848 and, along with other countries challenging Hungarian rule, a revolution was established.  Those revolting took the basic flag design to represent their cause.  These individuals chose the colours on the basis that they were used on the Russian flag, (Russian was an opponent of Hungary at that time).

The coat of arms of Croatia is superimposed onto these three stripes. It is essentially a large red and white chequered shield, crowned by five smaller shields. These five smaller shields each represent five different regions within Croatia.  The regions are Slavonia, Istria, Ancient Croatia, Dubrovnik and Dalmatia.  The coat of arms is placed in at the centre of the flag, placing the crown in the red diagonal stripe and the lower part into the blue diagonal stripe. The intersection of the diagonals of the flag is covered by the central element of the coat of arms.