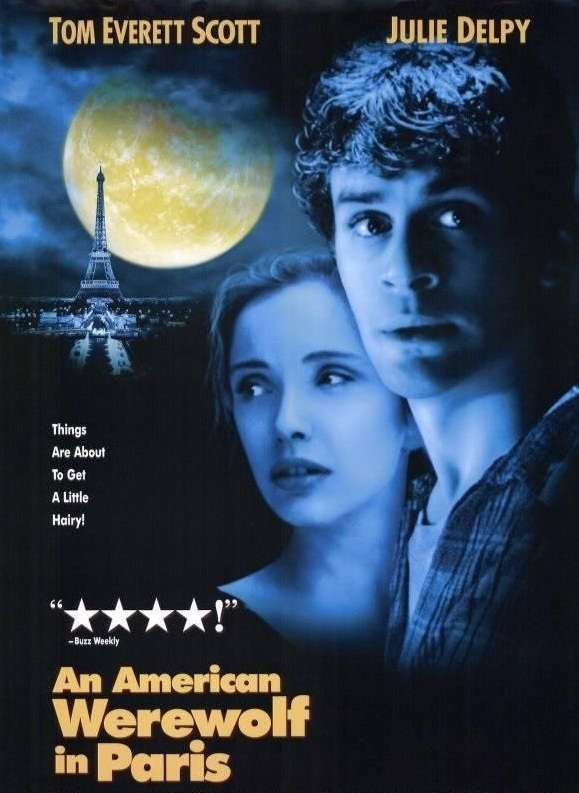 Want to learn more about the American werewolf in Paris? Read our guide for facts and info on this 1997 feature film…

An American Werewolf in Paris is a movie about werewolf horror and comedy, directed by Anthony Waller in the year 1997. The stars were Tom Everett Scott as the hero and Julie Delpy as the female lead.

American Werewolf in Paris – The Story

The movie opens with a scene of a man being attacked in the shadows in the Parisian sewers. In another part of the city, the tourist Andy McDermott is sight seeing with his friends Brad and Chris.

Andy is about to bungee-jump off the Eiffel Tower when he sees the female lead Serafine Pigot attempts suicide by jumping off the Eiffel Tower and Andy executes a mid-air rescue. However, she disappears in the dark and leaves Andy perplexed. She is actually the offspring of the couple pictured in a flashback of 16 years earlier.

Eventually Andy tracks her down and they go on a date to the Club de la Lune which is a night club and the name translates into Club of the Moon. The moon was full and the club was owned by members of a werewolf society who had planned to kill and devour all the clubbers.

Andy tries to escape but one of the werewolves attacks and bites him. He wakes up in Serafine’s bed to find fang marks on his leg and is told that he is transforming into a werewolf, and this was confirmed by his consumption of raw steaks.

He can see Chris hanging outside the bedroom window and warning him to flee. He finds Serafine’s dead mother and Brad’s body being hauled from the river with a missing heart. Brad’s ghost approaches Andy and tells him that he has to eat the heart of the werewolf who bit him and then he will be normal again. And for Brad’s soul to beeat peace, Andy is asked to kill

American Werewolf in Paris – Making Sense of It All!

Well, Andy decides to meet up with an American tourist on a date but he is changing into a werewolf gradually. His transformation is very painful and he accidentally killed the American tourist and a police officer who was trying to track him down since the massacre at the club.

He loses consciousness and wakes up in the graveyard right next to the corpse and is surrounded by the police. Now Andy can see the American tourist’s ghost along with Brad’s ghost.

Now this woman is trying to kill Andy while Brad is trying to keep him alive so that he can be avenged and his soul can find peace. Serafine informs him that her stepfather was working on medicine to cure her from turning into a werewolf however, it increased the transformations.

Unfortunately they run into the werewolves who kill Serafine’s father. Andy barely manages to escape during a fight and chase scene where all the werewolves are attacking people again in the club and there are many cops chasing them and Serafine accidentally gets shot.

However, Andy finds the one responsible for biting him and he manages to kill him and also avenge Brad’s murder and gets cured. The end shows Andy and Serafine as a couple and the credits finally roll on the movie.