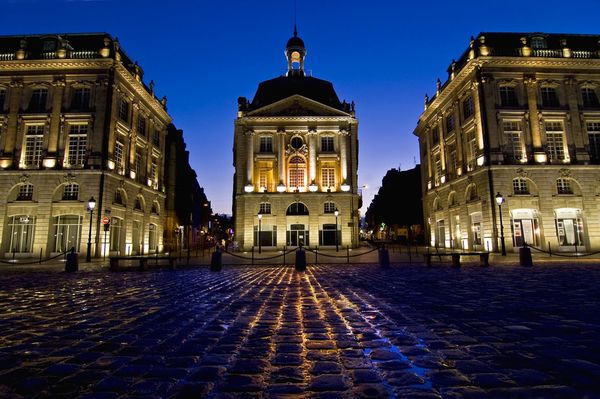 Looking for cheap flights to Bordeaux France? Want to know which arilines fly to Bordeaux airport? Our guide gives you the facts & informatio nyou want to know.

Bordeaux is in the Southwest of France on the River Garonne. The capital of the Aquitaine region, it is also the Prefecture of the Gironde department. Bordeaux has a population of 1.2 million and is one of the largest metropolitan areas in France.

The Aéroport de Bordeaux Mérignan (BOD) which is 8 km from the centre of Bordeaux City is one of the biggest airports in France in terms of passengers, in 2006 over 3,100,000 passengers passed through its terminals. It started in 1917 as a joint civilian/military airfield. Used as a major base by Air France with flights to destinations in Northern Africa and all over Europe, it was also used as a bomber base and training centre by the French Air Force.

The city’s origins lay back in 300 BC when its name was Burdigala named after the nearby river, the Bourde. The world renowned Bordeaux industry started back in the 8th Century and now produces over 700 million bottles per year from 13,000 grape growers with an annual sales figure of 14.5 billion euros.

Another industry for which Bordeaux is now well known is its space and aeronautics research. Its tourist Industry is growing fast, over 3 million tourists were welcomed last year to this city to visit the vineyards (of which it has 117,000 hectares), the city itself and the beautiful Aquitaine region.

Next time you have a weekend free why not consider taking a cheap flight to Bordeaux and explore this enchanting region a little. There is a lot to see and do and it doesn’t have to cost a fortune.