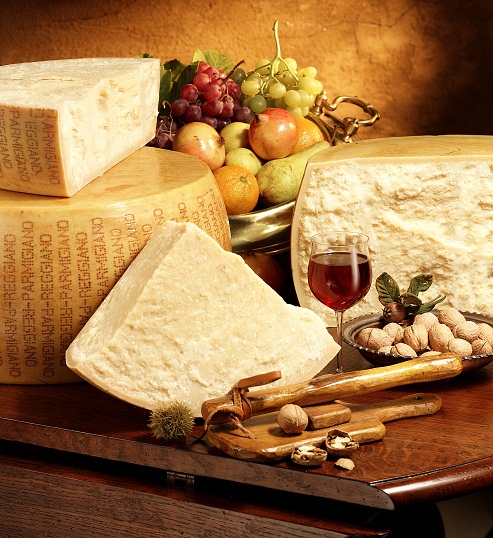 Are you interested in the best French cheeses? Do you want to buy some French cheese on your next trip to France? Here we’ve listed the most famous types of cheese in France and some of their qualities.

Most people in France buy their cheese from a specialist cheese seller, or fromagerie as it’s called in French.  Fromageries, also known as creameries, are small shops usually managed by the owner who knows about French cheese in detail. This means he can advise you about what cheese is best for you and give you a French cheese that is ripe to the exact degree you desire.

You can also taste a sample of French cheese at a fromagerie in France before you buy. The store keeper will cut a bit of cheese from under the rind for you to try. Because people in France like to eat their cheese within a few days of buying it, (as is the case with buying French bread in France) you can also ask to buy only half a round of cheese if that’s all you want.

Most French cheeses last a couple of days without refrigeration, even during the summer months. However, the softer blue French cheese do tend to melt if you are carrying them around in a pack all day.

Roquefort cheese is one of the oldest and most famous types of French cheese. Named after the village it is made in, this French cheese has a history going back over 800 years. In 1407 King Charles VI gave exclusive cheese making rights to the villagers of Roquefort, while in the 17th century strong legal penalties were meted out to anyone caught selling imposter Roquefort cheese. This type of French cheese is characterized by the blue green veins that run through it. This is achieved by using tiny mushroom seeds collected from the caves of Roquefort which are then applied to the cheese and stored in a cave where a fungal reaction takes place on the cheese.

Camembert is produced using unpasteurized milk, and is ripened by the moulds Penicillium candida and Penicillium camemberti for up to a month. This type of French cheese is made in small rounds which are wrapped in paper and packed in wooden boxes.