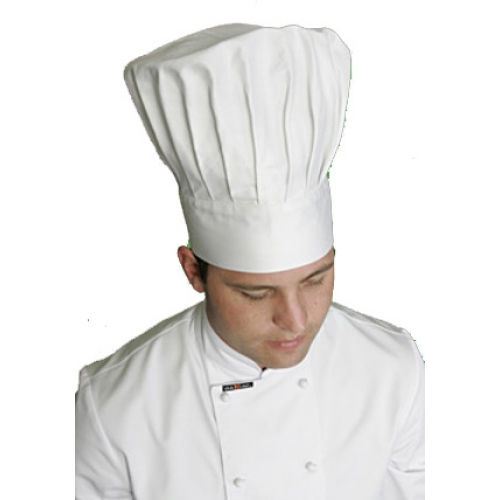 French chef uniforms are perhaps amongst the most recognised professional uniforms in the world. These consist of the special double-breasted jacket, the apron, the checkered trousers and the unique pleated hat. The French chef’s uniform as we know it was first designed in the late 1800’s by one of the most world-famous chefs in the world, who is also widely credited with inventing Nouvelle cuisine which is the contemporary way of preparing and serving traditional French cuisine. The correct name for the French chef’s hat is toque blanc, which simply means ‘white hat’.

The famous toque (the chef’s hat) has been worn since as far back as the 1700’s in France (although there are other European countries that have claimed to have invented the chef’s hat). It is widely believed that the French chef’s hats originated from the stocking caps that were worn by chefs previously. During this period hats were worn in most professions, and not just by chefs. What is most interesting about these toques is that the longer or higher it is the more important the chef. So the smallest hat would be worn by the most inferior employee in the kitchen. The toque is identifiable by its’ many folds. There are in fact 100 folds. These are meant to indicate that the chef is skilled in cooking an egg 100 times.

These are not solely intended to keep hair from falling into the food being prepared.  These days these chef’s hats are now commonly made from non-woven vegetable fibre. This makes them very light to wear, they are comfortable, look good and are of good quality.

Another reason of the popularity of chef’s hats made of vegetable fibre is because they absorb sweat much better so can be worn for several days instead of wearing a new one each day. Less sweat also means the skin is less likely to become irritated. Good quality chef hats will also be adjustable.

Design of the French Chef’s Hats

The chef who invented the traditional French uniforms as we know them is Marie-Antoine Careme. He was the one who decided that the hats and the uniforms should be white because this denotes hygiene and cleanliness. He is also credited with having started the tradition of different length hats denoting different levels of rank within a kitchen. For example, the cooks hats are shorter than the chefs hats. It is reported that Careme’s torque was 18 inches tall.

Similarly, the number of slits in the chef’s hat denotes their level of accomplishment as well. The more slits in the torque the more accomplished the chef is, with 100 slits meaning that he is extremely accomplished.

Because of the purpose and significance behind the traditional toque blanc chefs all over the world place create pride in their hats, as well as their uniforms, and so it has not changed that much over the years.