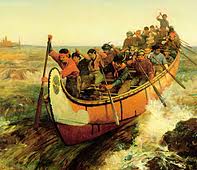 Do you want to about the French Explorers who were instrumental in setting up colonies all over the continent of North America? Have you wondered about what the French were trying to look for when they came to the New Found Lands? Read our guide for

Two of the most important discoveries made by French explorers were the New Found Lands and the Indian subcontinent. Even though the French eventually lost control of the Indian subcontinent to the English they did stay back in the New Found Lands. Four explorers led the French way to the new found lands. Among them the first was Giovanni Da Verranzano even though not French by birth he took the exploratory voyage to the New World on behalf of France.  His purpose was to find a route to the Indies through the continent. To do so he sailed all along the east coast of America in search of a passage that would take him to the West But after failing to find it he returned to France.

Finding a direct way between the two great oceans Atlantic and the Pacific would mean naval dominance for any country that discovered it. So France continues its relentless search for such a river on the American subcontinent. After Verrazona in 1534 another French explorer Jacques Cartier tried to search for a passage that would lead to the East Indies through the American continent. The discovery of the St. Lawrence river can be credited to this explorer who in his quest to find a river long enough to carry ships from the Atlantic to the Pacific ocean found  the St Lawrence River which ended too soon.

But Cartier can be credited with the discovery of what is today Montreal. St. Lawrence River ended on a high hill which was named Mont Real in honor of the French King. And Yesterdays Mont Real is today’s Montreal. The discovery of this city paved the way for other Europeans who wanted to come to North America. The area was claimed by Cartier as New France. Cartier also formed another colony Cape Rouge near present day Quebec which was a failure. After this debacle the French abandoned their plans to look for the passage at least momentarily.

In 1608 almost 70 years after Cartier, Samuel de Champlain brought along a group of colonist and they set up a colony around Montreal. Champlain brought in missionaries to build churches and opened trade with the Indians. He discovered Lake Champlain. He also explored the east coast of Canada and the New England Coast.

Finally a missionary called Father Marquette and Lois Joliet set out on the mission to find the river that would lead them to the Pacific. Instead they discovered the Mississippi river. They traveled down south to Arkansas before realizing that the river did not lead to the Pacific and returned back to the north.

The French were not successful in their various attempts to find the river that would join the two great oceans of the world because it did not exist yet they made several other important discoveries.