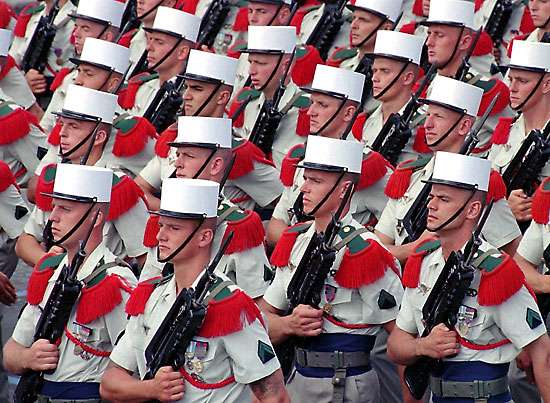 Want to join the French Foreign Legion? Want to know the recruitment procedures? Our guide gives you the facts & information you want to know.

The French legion is a famous military organization wrapped in mystique. The Legionaries with their familiar white kepis have been a subject of many films, novels renowned for giving men on the run a second chance at redemption. The Legion is renowned for its distinct uniform, songs and bold daring feats. These men are willing to fight and give their lives for France, their adopted home-land. The French foreign legion recruitment procedures follow some basic outlined steps.

The interested candidate wishing to pass through the French foreign legion recruitment process would first have to present himself at any legion recruitment office in France. The candidate undergoes preliminary check-ups and is then transferred to the selection center in Aubagne close to Marseille to undergo further medical, fitness and IQ tests. Upon successful completion of the French Foreign Legion recruitment pre-test he has to sign a five years unconditional contract agreeing to serve wherever the French legion sends him. Any unsuccessful applicant is sent back to civilian life in his country with no compensation.

For the first four months of the five years preliminary service is dedicated to receiving basic military training at the 4th foreign regiment. From here the recruit gets posted to a regiment to serve depending on his skills and the French Foreign Legion needs.
To apply for induction at the French Foreign Legion recruitment center you would need a passport, secondary identification and a French Visa. The French Visa might not be a necessity depending of your country of birth and residence.

To apply at the French Foreign Legion recruitment centre you do not have to be able to speak French. You would however find things easier during the early days of service if you try to learn the basics as the first four months of training would take place in France. After the five year tour of service the legionnaire has the option of applying for French citizenship.