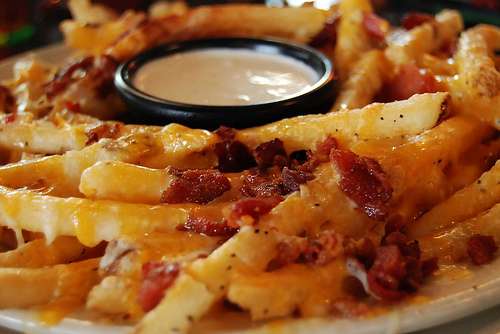 From the commercial, frozen variety to the gourmet bistro style potato wedges French fries are popular and seasoned with different ingredients to appeal to a myriad of taste palettes. One of the most favorite ingredients is cheese which is used to prepare many French fries with cheese recipes. An interesting fact about French fries is that they are not historically part of the French cuisine.

For an easy to prepare dish that can be frozen and reheated as required, why not make a savory potato wedge snack or bistro style side dish using special French Fries with cheese recipes?

French fries with cheese recipes are commonly found on restaurant menus but can easily be prepared at home. One thing to keep in mind is that the cheese sauce is best if consumed immediately.

The best thing to do is to make a mix of the dry ingredients, and store them in an airtight container in the kitchen pantry. This will allow you to prepare French fries with cheese recipes at your convenience.

Then what you can do it prepare the potatoes beforehand and cook up the sauce when you want to serve savory potato wedges. French fries with cheese recipes traditionally involve two steps of preparation. The first one includes preparing the vegetable and the second one deals with preparing the sauce.

Peel and slice the potatoes into 1/4 inch thick sticks and put them in a bowl of ice water with salt. Rinse the potatoes with cold water till the water runs clear. Drain the potatoes in a colander, spread them in a flat layer on a tray with kitchen paper towels and pat them dry.
Heat the vegetable oil in a wok until the thermometer reads 375°F. Place an oven rack in the center of the oven and preheat it to 200°F. In a separate pan cook the shallots with thyme in the butter and stir frequently till soft and golden. Now add the vinegar, and keep boiling till the liquid is reduced to half, approximately for three minutes and then remove the thyme sprigs.

In a separate bowl mix the water and cornstarch until it is dissolved. Mix the beef into the shallots and whisk in the cornstarch mixture and return to boil till the sauce thickens for approximately 2-3 minutes. Now remove from the flame and stir in the black pepper, salt and unsalted butter until it melts.

Fry the potatoes in three or four batches in the hot oil until they are deep golden, approximately 5 to 6 minutes on each batch. Drain oil and sprinkle lightly with salt. Place the fries in an oven proof dish and sprinkle with cheese. Bake till cheese is warmed through in two minutes and stir in chives into the sauce and drizzle over fries. Serve immediately.