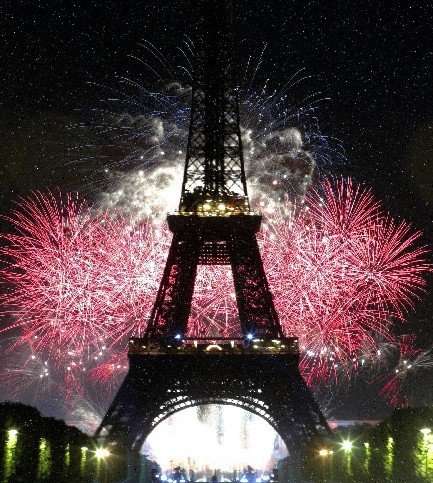 There is one Special day in French tradition where fireworks shows are mandatory. To learn more about the best French fireworks shows read our guide for more facts and information…

The 14th of July is a very special day in France. So much so that it is a national public holiday. And, millions of tourists from around the world come to see the incredible display of fireworks on this day. This is Bastille Day.

Events Leading Up to Fireworks

The day begins with trumpets being sounded. This is done so as to signal to the French people that their president has reached the top of the Champs-Elysees. This is followed by the French army parading down the streets of the capital city, Paris. Throughout the rest of France firemen hold fundraisers for charity by hosting dances. The day then culminates in a magnificent fireworks show from the iconic Eiffel Tower. These fireworks rival those held in the United States on 4 July, Independence Day.

However, Bastille Day is not the only time people can enjoy seeing the Eiffel Tower lit up by multi-coloured fireworks. New Year’s Eve, at midnight, is another excellent time to be in Paris for beautiful French fireworks. The fireworks display during this time rivals the other famous ones put on in New York, Hong Kong, and Sydney Australia.

However, there are other places in France in which people can view world-class fireworks displays. The French Riviera is one such region. Here, during August there are firework displays that take place every evening for ten nights. Each show lasts for 30 minutes. What sets these shows apart from other firework displays in France is that these are pyromusical, which is the inclusion sound effects, and not just the lights of the display.

In order to see these one can either go to Antibes, Monaco or Cannes which are popular summer destinations in France.
Though less spectacular, there are other displays in Cagnos, Nice, and Villefranche-sur-Mer.

In Monte-Carlo every year there is a firework display contest in which many countries and competitors take part. Here there is also the combination of sound (using an extremely powerful sound system) with the fireworks, thereby creating a spectacular effect for spectators.

In Cannes only three countries can compete. Each competitor receives one evening in which they can put on their show, with the winner walking away with the prize of ‘Vestale d’Argent’.

In order to be able to see the best French firework shows one has to go during the summer, for Bastille Day, or in August in celebration of the end of summer. And New Year’s Eve may be the most romantic time to take a partner to experience the romance of the fireworks of the Eiffel Tower.