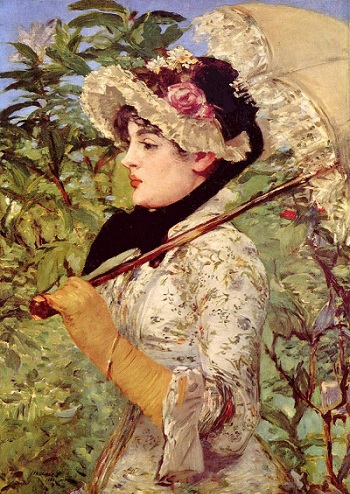 In the mid-19th century the Impressionist movement emerged onto the art scene as a reaction against academic tradition and romanticism.  The movement originated in France and the most famous exhibition of Impressionist works was in Paris in 1874 from April 15 to May 15. The name of the movement was coined by critic Louis Leroy in a satirical critique of Claude Monet’s work titled Impression, Sunrise.  The Impressionists pieces were made available for public viewing beginning in 1863 when the Salon de Refuses was created in Paris to show works, mainly in the French Impressionist style, which had been rejected from the Salon. The style of French Impressionism in art came to influence literature and music over time.

French Impressionism was also known as the Art of Immediacy because of the style it was created in. Impressionists works featured visible brush strokes that were light, wispy, and frequently broken.  The colour was also applied with as little mixing as possible and black paint was avoided in the traditional works.  The Impressionist artists were also interested in the effect of light in their art and focused on capturing light in the paintings. French Impressionism also sought to include movement in the works through the use of angles.

French Impressionism also broke from tradition as thanks to technological developments such as storing paint in transportable tubes, artists began to paint outside of the studio in plain air. Impressionists works featured subjects of people, nature, and stationary objects. No matter what the subject matter of the piece was, the painting was created like a picture; this meant that the scene was not always complete, as, for example, faces may have been only half complete.

The Impressionists Versus The Critics

Since the earliest days of French Impressionism the artists and the critics have been at war. Impressionism emerged as a response to the traditional forms of the time so this conflict is not surprising. The critics beginning with Louis Leroy often felt that many of the works looked unfinished or rushed. Despite the negative press however, the general population of the time began to look favorably on Impressionism through events such as the Salon de Refuses. Like many other styles of art French Impressionism gained prominence many years after its peak as today works by prominent Impressionists such as Monet, Cezanne, and Renoir are highly valued.

French Impressionism signified a break from tradition as not only did the finished pieces look different from preceding art works but the conventions of painting in studio were broken. French Impressionism although initially doubted in its own time, has come to be a defining period in the history of art.