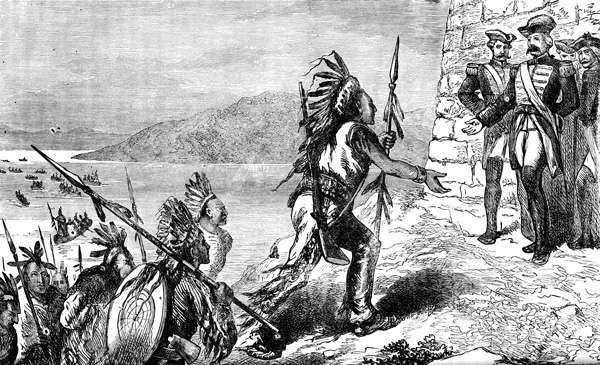 Studying the French Indian War? Want to know about the outcome of the War? Our guide gives you the facts & information you want to know.

The French and Indian War was fought between Britain and France during the 1750’s over territorial control of North America. Both nations saw increase in territory as important in helping them increase their wealth and power in comparison of its rival.  Though most of the fighting ended on the 8th of September, 1760, the war officially ended with the signing of the Treaty of Paris on February 10, 1763.Although the war itself stemmed from a fairly simple motivation, its consequences were far- reaching. The French Indian War outcome decided the colonial fate of North America, and yet at the same time sowed the seeds of the eventual colonial revolution.

The Most Important French Indian War outcome resulted in France’s loss of all its North American possessions east of the Mississippi, except Saint Pierre and Miquelon, (two small islands off Newfoundland). France recovered the Caribbean Islands and Martinique, which were formerly occupied by British.

Another French Indian War outcome was Britain’s gaining control of French Canada, a colony containing approximately 65,000 French-speaking, Roman Catholic residents.  The war altered the relationship between Britain and its colonies including economically, politically, and socially. It put Britain in debt and the Crown decided to fund repayment with harsh taxes on its colonies. These taxes were not appreciated by the colonies and contributed greatly to the American Revolutionary War.

The French Indian War outcome also had lasting and devastating effects for the Native American tribes of North America. The British took revenge against Native American nations that fought on the side of the French by cutting off their supplies and then forcibly compelling the tribes to obey the rules of the new mother country. With the French gone, the British government focused its attention on the Native American tribes that lay along its path. All these factors played a role to determine the multinational Indian revolt called “Pontiac’s War” that erupted directly following the French Indian War outcome.

One of the most important outcomes of the French Indian War for America was that America had, at the end, men who were armed and who knew how to fight in armies, and men who were experienced at leading armies.  Common citizens learned to fight with discipline, and many colonists became great leaders of their years. When the colonists became frustrated with the taxation and levies placed on them, they already knew how to take up arms and had experienced men to lead them. There is no denying that if there had never been a French and Indian War, there might not have been a Revolutionary War, at least not then. The French Indian War outcome in conclusion saw Britain emerge firmly entrenched as a world power.