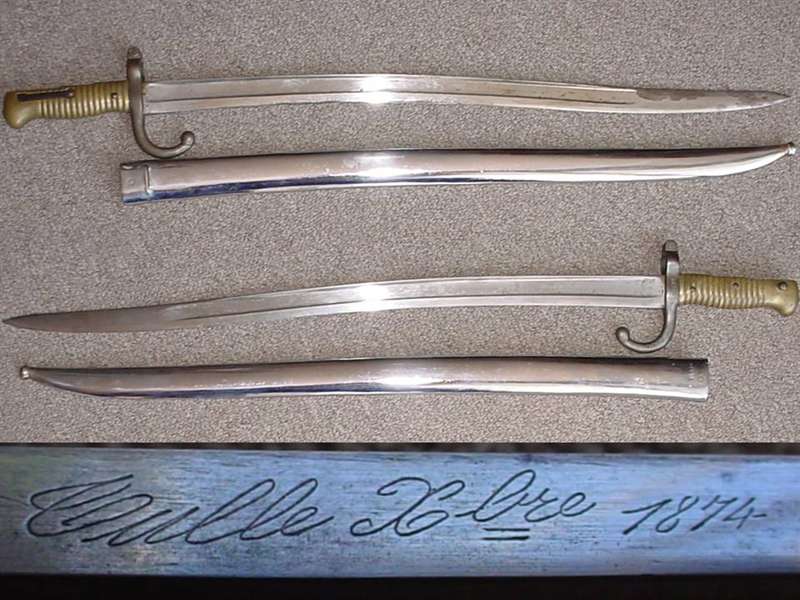 But the original French sword bayonet model of 1866 was designed to sit with the French model Chassepot Rifled Infantry Musket of 1866. For those who are wondering why was the trouble taken to match the sword with the musket? It is because the musket was quite revolutionary in itself. The 1866 French sword bayonet was preceded by the 1842 design and in 1874 this design was replaced by the 1894 French Model bayonet also called the Gras.

The bayonet has a spring steel latching arrangement on its left side. It is brass hilted and the cross guard is made of iron or steel and is tightened with the help of a screw type arrangement on the muzzle ring. The lower quillon is of the hooked type also known as the ‘blade breaker’.

The blade itself is made of steel. It is single edged with a recurved shape and fullered on both sides. The bayonet is also called the Yataghan sword bayonet because of the Yataghan shaped design of the blade. The date of manufacture and other manufacturing details can be confirmed through the markings on the back edge of the blade. This is the edge opposite to the cutting edge.

It will usually have the month and year of manufacture and the arsenal. The markings are done in the engraved cursive fashion. For this particular type of sword the markings will be “ Mre d’Armes De Chatellerault Janvier 1866”. Many people believed that this was the date of presentation of the sword or that the name in the beginning was the name of the lieutenant or major but that is incorrect.

Au contraire to what many people believe these swords were not used in the American civil war even though arsenal manufactured in Chatellerault, Paris-Oudry, Tulle , St Etienne and Mutzig have been confirmed yet the 1866 sword has not been confirmed.

There isn’t one standard design of this sword and various versions were manufactured by the thousands for the infantry. The scabbard of this sword is usually blue. It is made of sheet rolled steel with a ball finial.