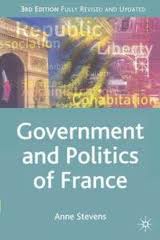 Are you visiting France on holiday? Would you like to know about the government & politics of France? Here we provide useful information and facts about the French government.

The constitution of France

The road to democracy in France has been a long and often troublesome one. Since 1789 France has had no less that 11 constitutions. The most recent one, which still applies today, was established in 1958 by Charles De Gaulle who was president of France at the time. This constitution ushered what had become known as the fifth republic.

Head of Government in France

According to constitution of the fifth republic of France, the president is afforded a great deal of power.  Aside from being the official head of government, presidents in France serve for seven year terms whereas in most other western European countries terms are limited to four years. The president, who is also the commander in chief of all France’s armed forces, is directly elected by the general voting population of France.

The senate, which has considerably less power than the National Assembly, consists of 321 members who serve nine year terms. Senate members are indirectly elected. The voting age in France is 18.

Executive power in the French Government

Executive power in the government of France is shared between the president and the council of ministers. Ministers are appointed by the president but are responsible to parliament.

France is a permanent member of the UN Security Council. France still administers territories abroad which are technically considered a part of France.