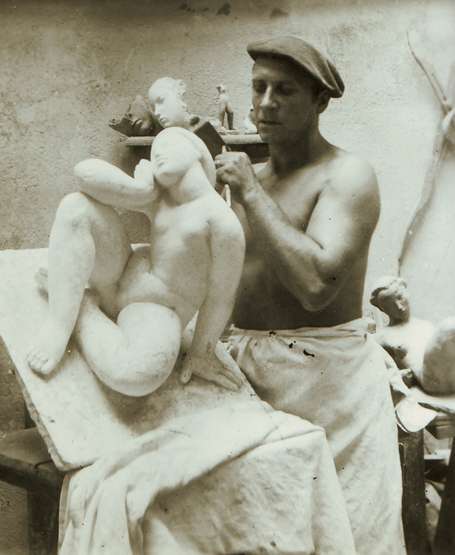 Are you interested in sculpture in France? Would you like to see some French sculpture on your next holiday to France? We’ve put together useful facts & information to give you an insight into the history of French Sculpture.

Sculpture first began being used as an artistic medium in France during the 11th century.  For the first few centuries after its introduction, sculpture, like other forms of art was solely the reserve of the church that used it as a means of influencing the masses. During the 11th century sculpture was used in French churches often to illustrate themes from the bible or the lives of Christian saints.

By the 13th century the role of sculpture had expanded, all be it remaining under the control of the church, to include entire walls of churches and cathedrals. Epic biblical stories were carved into the walls of churches across France as a way of educating the illiterate masses about biblical events.

The 14th century saw the first artistic innovations in French sculpture occur. Claus Slutter, a famous French Sculpture of the time introduced the concept of realism into his works, some of which can still be seen today at the Charteuse De Champnol in Dijon.

At the same time sculpture also began to be seen on the tombs belonging to the French Royal Family and French nobility.  The Basillica at St. Deins near Paris is the best place to go to see this type of sculpture in France as this is where many royals were buried from this period.

The theme of carving sculptures on the tombs of royalty continued into the 15th and 16th centures with various developments in artistic style. The renaissance, which originated in Italy influenced artistic mediums throughout all of Europe including France. Pierre Bontemps, one of the 15th centuries’ greatest renaissance sculptures from France was responsible for the carvings that adorn the tomb of King Francois I at St. Denis.  Another example of renaissance sculpture to be found in Pairs is the Fontaine des Innocents done by Jean Goujon.

Baroque, which succeeded renaissance as the primary artistic means of expression after the 16th century, remained popular in the world of French sculpture for about a century. Arguably the best example of baroque architecture to be found in France today is the Horses of Marly which stand at the entrance to the Champs Elysees.