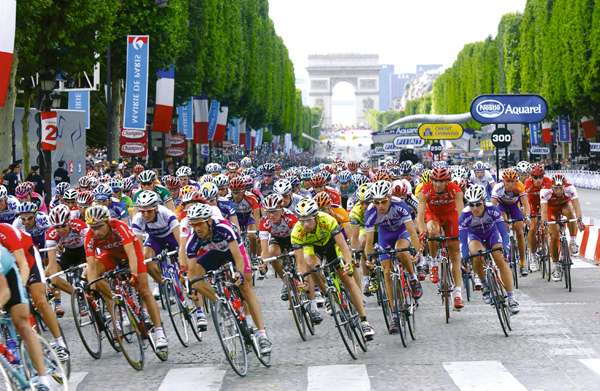 November 20, 1902 is a red letter day in the cycling world. This is the day the Tour de France was born. The idea of Géo Lefèvre, the chief cycling journalist of l’Auto, it was suggested to his Editor, Henri Desgrange, during lunch at what is today the TGI Friday Bar in Montmartre, Paris. The idea was accepted and officially announced on January 19, 1903. The first Tour de France took place later that year. Now, over a hundred years later it has grown to be one of the most famous events in the sporting calendar. Everyone’s heard of it and the famous “Maillot Jaune” (Yellow Vest) worn by the winner.

Quoted as being “…arguably the most physiologically demanding of athletic events” by the New York Times in 2006, it is certainly seen by many as the most difficult cycling event in many ways. It takes place over different terrain and varying distances and to win requires incredible stamina, excellent sprinting abilities and a strong, reliable team supporting you.

The Tour de France is based upon a 22 day, 20 stage Road Race between 3,000 – 4,000 km (1,800 – 2,500 miles) in length that, theoretically, covers the whole of France. In fact, this prestigious Race crosses over into neighbouring countries every year and although certain stages remain in the race agenda from one year to the next, others change every year. The length of the race has varied between 2,420 km in 1904 and 5,745 km in 1926. The total length of the Tour de France is impressive enough but only when the length and difficulty of the individual stages is taken into account can we begin to appreciate why this particular race has such a fearsome reputation. Each of the 20 or so stages is completed in a single day. Although some are comparatively short (about 50 km), being Individual Time Trials, the average stage is between 150 and 250 km over some of the most challenging roads in France and the surrounding countries. Mountain climbs are rated between 1 (the hardest) to 4 (the easiest) but some of the most difficult recurring stages are rated “hors-categorie” (unclassifiable). These include the “Col du Tourmalet”, “Mont Ventoux”, “Col du Galibier”, “Hautacam” and the “Alpe d’Huez”.