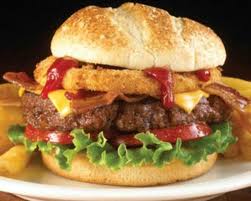 Want to learn more about Linda’s Parisian burger? Read our guide for facts and info on this old school burger that has been popular in Paris for ages…

The country of France is known for its wide variety of gastronomical delights amongst other things. One of the all time classic old school fast food items found in the heart of Paris is Linda’s Parisian burger.

This is a unique burger to say the least. It is a step aside from the conventional burger that you will be able to find out there in the market. Although the basic ingredients are pretty much the same with little variations, there is just something about this burger that makes it special.

The famous Parisian burger is made using small round French rolls made out of sour dough. However the buns used for Linda’s burger are slightly larger in their diameter than your conventional hamburger. Between the buns are two extremely juicy beef patties. Traditionally the makers would use high grade patties from Denver Meat Company meat and the patties were thicker than usual as well. A thick cheese slice would separate the two patties and a glob of sauce would be placed inside. This basic composition of Linda’s Parisian burger has been maintained over time.

The delicious and thick burger patties are gas fried on a grill at about 350 degrees. The meat was cooked until it released the grey juice on one side sighting which the patties would be turned over. While the patties would be getting grilled the buns, sauce and cheese would be prepared on the other hand.

In order to prepare the buns the sourdough rolls would be heated on a covered grill at a temperature of about 250 degrees. It would be toasted until the insides of the sourdough would begin to toast just a little bit. One and a half spoons of the sweet and sour sauce would be applied on one of each patty and the cheese would be placed on the other. When prepared the burger would be wrapped in waxed paper and served to the public.

One of the things that made Linda’s burger famous all around Paris was the unique sauce that accompanied the burger. This sauce was made using ketchup along with mustard, celery seed, dehydrated onions and pepper. In order to prepare the sauce first the onions would be re-hydrated in warm water and left for about an hour. Following this all the other ingredients would be added in and mixed well together. The mixture needs to be heated over a low heat and then the onions were added to the mixture.

This special sauce is best when served warm and can be used to accompany all other kinds of meat based dishes apart from Linda’s burger. Linda’s Parisian burger is credited as being one of the first few fast food items to have been sold in Paris. In fact there were no other major fast food joints at the time Linda’s was making it big amongst the locals. Until this day old school enthusiasts have an unrivaled liking for Linda’s Parisian burger.