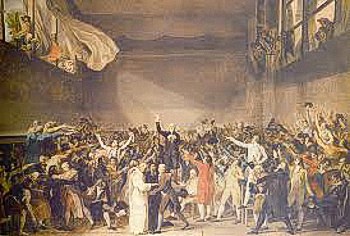 The beginnings of the French Revolution may be said to have been kindled when Étienne Charles Loménie de Brienne, a Statesman and a Cardinal of the Roman Catholic Church succeeded Charles Alexandre de Calonne as Minister of Finances.

This opposition forced King Louis XVI to agree to the calling of the States-General. Elections were ordered in 1788, and on May 5, 1789 the States-General (which had its origin in the king’s council, or curia Regis) or National Assembly in which the chief estates of the nation—usually clergy, nobles, and towns (or commons)—were represented as separate bodies, met at Versailles.

The States-General had not met since 1614. The chief intention of King Louis XVI and of Jacques Necker, who had been recalled (he had earlier occupied the position of Director General of Finances, had resigned and was subsequently exiled from the city in 1787), was to obtain the assembly’s approval to a general financial restructuring.

The clergy, nobility, and the commons, comprising the three Estates; presented its particular grievances to the crown. Countless lists of grievances (cahiers) flooded in from the provinces. It also became obvious that far-reaching political and social reforms were expected from the States-General greatly exceeding its original agenda.

The desires of the bourgeoisie were expressed by Emmanuel Joseph Sieyès, known as Abbé Sieyès. In his widely circulated pamphlet, Qu’est-ce que le tiers état?, it was implied that the third estate and the nation were practically identical. The pamphlet also attacked the privileges of the nobles and the clergy.

A dilemma soon arose whether the estates should meet separately and vote by order or meet jointly and vote by head. Voting by head would assure a majority for the third estate, whose membership had since doubled.

The King Louis XVI’s indecisiveness in the face of these problems, led the deputies of the third estate to defiantly proclaim themselves the National Assembly on June 17, 1789; on their invitation, many members of the lower clergy and a few nobles joined them.

When Louis XVI ordered the closure of their meeting place, they adjourned to an indoor tennis court, the jeu de paume, and there took an oath on June 20, 1789 not to break up until a new constitution had been drawn up –  hence the Tennis Court Oath. On June 27 the king yielded and legalized the National Assembly. Simultaneously, however, he encircled Versailles with troops and let himself be persuaded by a court faction, which included the queen, Marie Antoinette, to dismiss Necker.

The storming and the fall of Bastille heralded the beginning of the French Revolution and the rest is history.

France 0 96
Have you always wanted to experiment with the French twist hairstyle? Did you always

France 0 14
Are you going on holiday to France? Do you want to see the best

France 0 7
Are you looking to rent a river boat in France? Perhaps you’d like to