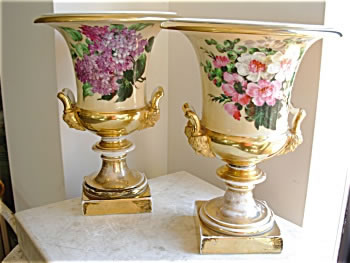 Want to buy old Paris vases? Looking for the perfect Old Paris vase? Read our guide for facts and info on these traditional craft items…

Old Paris Vases are part of the vintage collection of many homes today and are a prized possession. These vases were utilized not only as decorative ornaments in home furnishing but also in later years converted into high utility items like lampshades.

Old Paris Vases are often made of porcelain in France and manufactured using Vieux Paris Porcelain, which is old Paris Porcelain made not by a single producer but more than 30 manufacturers. These producers were based in the city of Paris during the 18th century up until 1870 which was the end of the second Empire.

The term came into use in the later half of that period. The artisans were located in the northeast side of Paris and went out of business by that time.

Initially they were competing with King Louis XV own Royal Manufactory at Severes. This factory was located only 18 miles near the southwest of the city. And unfortunately the local artisans were marginalized because King Louis XV brought into force specific laws that restricted the activity of other porcelain manufacturers. Also, since Severes seriously limited the activities of independent porcelain makers, most of the pieces from that time were unmarked by the artisans to avoid offending the King.

However, when Old Paris Porcelain started having a positive impact on the economy the laws were abolished and artisans had more leverage in their practice.

Old Paris Vases come in a variety of beautiful designs and mesmerize the viewers, each one more beautiful and intricate than the other. The exquisite craftsmanship on each piece is truly an ode to the skilled craftsmen who created the Old Paris Vases, and one can understand why they are valued till today.

The basic kind of old Paris vases followed an elegant theme in their craftsmanship. The French Empire form was often heavily gilt decorated, and had figural handles. Each side of the vase had beautifully painted landscape or figures of people reflecting the daily charming lifestyle prevailing in France in the 19th century.

The beautiful pair of antique French old Paris vases is hand-painted with Gilt roses. These large vases are used to decorate the mantelpiece and are shaped like tulips and have a burgundy front. The hand-painted cartouché is large and oval in shape with a large gilt band encircling the rose bouquet. The well-formed top is rimmed with a thick gilt band and the elaborate sides are covered with vine leaves in gilt.

Another beautiful Old Porcelain vase of the classical era hails from around 1810 to 1815 and was created by the French manufacturers Paris Porcelain.

This beautiful piece is created with a gilt body and has a sweet reserve painted with the image of a seated mother and her playful Child. Since the vase has aged considerably over time, there are some signs of wear. This beautiful piece has a border in a feathery motif and the back has etchings of a trophy of musical instruments, with the handle created to replicate a female mask worn by the Greeks.