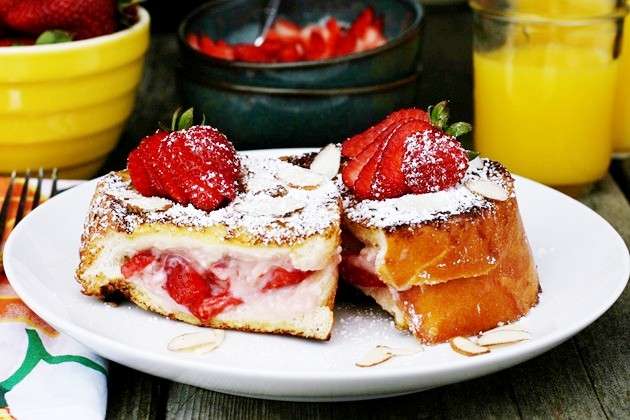 Do you enjoy French toast? Are you looking for a new delicious recipe that is a variant on the traditional classic? Do you want to learn to make and enjoy stuffed French toast? Read our guide for more facts and information…

Making stuffed French toast is a relatively simple process just as the ingredients are simple. Perhaps the trickiest part of the recipe is the first step as you must slice the French bread while creating a pocket for the filling. Although, this sounds complicated it is actually easy to make the pockets as first you slice the bread through. Then you make a second cut that stops before slicing all the way through and you finish by making a third cut which slices through. After this three step process you will be left with one slice of French bread with a pocket perfect for stuffing.

The rest of the recipe is easy. The next step is to make the filling. It is easiest to make the filling in a small bowl, in which you stir the cream cheese and jam until it blends into a smooth mixture. Then the mixture is spread into the pocket created in the slice of bread. Once the filing has been created, the next step is to create the mixture to dip the bread into. The mixture must be made in a bowl large enough to allow you to dip the bread into it with ease. The mixture is made by whisking the eggs, milk, and vanilla together. Once the mixture has been made and the bread soaked in the mixture the final step in the recipe is to cook the stuffed French toast. The stuffed French toast should be toasted in a skillet with butter until it is golden brown on each side.  The recipe is then traditionally finished with either whip cream of a sprinkling of powdered sugar on top.

Stuffed French toast, although a traditional recipe, does have many variations that may better suit your taste. Common variations on this classic recipe include using flavoured cream cheese or a different flavour of jam. The cream cheese can also be replaced with peanut butter and bananas or a chocolate hazelnut spread. Stuffed French toast can also have added substance by changing the traditional filling for ham and cheese or peeled apples, brie cheese and cinnamon. Finally, if you are looking for a simple filling to use and enjoy, stuffed French toast pie filling is an easy solution to allow anyone to enjoy this wonderful recipe.