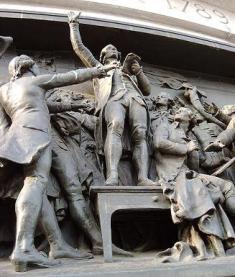 The Tennis Court Oath was a critical event in the French revolution that united the members of the National Assembly to pledge to pursue their goals towards establishing a constitution for France. Read our guide for more facts and information…

The Tennis Court Oath, was a pledge signed by the members of the Third Estate namely, the general French Public, stating that they would not separate till a written constitution was established for the kingdom. It is regarded as a significant event during the period of the French Revolution, since it inspired many revolutionary activities triggered by the revolutionary spirit of the National Assembly deputies. Works of famous historians like Thomas Carlyle served as primary sources for the events of the French Revolution. A summary of the oath is given below.

Situations That Led to the Tennis Court Oath

On June 17, 1789, the members of the Third Estate declared themselves as the National Assembly, following a disagreement caused with the First Estate (the Clergy) and the Second Estate (the Nobility) over finding a tax solution to address the downward economic spiral in the kingdom. However, on June 20, 1789, when they arrived at their designated meeting chamber, the Menus Plaisirs, to discuss their demands for reforms, they were shocked to find it locked and guarded. Suspecting that it was a blatant attempt by the king to put an end to their demands and fearing a royal attack, they moved to the royal tennis court to hold their meeting. As tennis happened to be an indoor game during those times, the tennis court called the Jeu de Paume was located close to the Palace of Versailles.  Instead of retreating to Paris or elsewhere, they decided to take an oath of allegiance. They pledged to continue to reassemble whenever required until a constitution was written.

Text of the Oath

The oath quotes the pledge of the Assembly members, and depicts their unwavering resolution, which was confirmed by their individual signatures. Of the 577 members of the Third Estate, 576 of them signed the pledge. Speeches given by the deputies expressed the woes of the peasants, urban workers and businessmen of France, and condemned the country’s tax system.
The text of the oath read: “We swear never to separate ourselves from the National Assembly, and to reassemble wherever circumstances require, until the constitution of realm is drawn up and fixed upon solid foundations.”

Significance of the Oath

It later became known that the chamber had been locked as the royal household was in a state of mourning over the death of the king’s son; political issues could not be attended to during such times. Though some historians consider the Oath as an over-reaction that took advantage of the tragedy in the king’s family, others argue that the fears of the Third Estate members were reasonable under the then political tensions. Nevertheless, the Oath signifies the citizens’ opposition to the king for the first time. The National Assembly’s determination compelled the king to convene a meeting to write a constitution.  Majority of the members of the Clergy and 47 members of the Nobility joined the Third Estate. It also forced the king to consider voting based on head rather than order.

Through the Oath, the representatives of the National Assembly clearly conveyed that the sovereignty of the French citizens rested in the people and their representatives rather than the monarch.