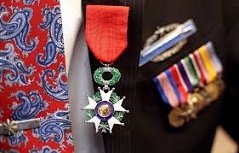 Want to learn more about war medals of the French military? Read on for a historical overview of French war medals…

Historically France has been one of the stronger military nations in the word. It had a mobile military which played a pivotal role in the expansion of the French colonial empire. Because of the massive size of the French military and its many expeditions many war medals have been created for the French armed forces.

Some of the most prominent war medals worn by members of the French military are given below.

This was the highest medal of honor awarded to any member of the French military. This particular medal was the distinguishing factor between an ordinary civilian and a war veteran. It was developed in the 19th century and with the passage of time new and higher classes of the medal were added. The denominations of the medal include the gold badge known as the Grand Croix, the grand officer, officer and chevalier.

The French developed this particular medal as a local counterpart to the distinguished conduct medal. Only general officers that served as the head of armies and admirals that were in charge of leaps were awarded this medal. Noncommissioned officers who produced a remarkable performance in battle were also awarded this war medal.

Without a doubt this particular medal is one of the most popular war medals from France. This medal was developed during the years of the First World War and was awarded to all those people that had their names in the dispatches that were to go out for the war. This medal had different classes which were distinguished by the Bronze palm, gilt star, silver star and bronze star.

This special French military war medal was developed following the First World War. Members of the French Army and Navy who got injured firefighting on the field were awarded with this medal. Prior to the development of this medal wounded war veterans were awarded with a ribbon. In 1916 the ribbon was transformed into a war medal.

This is a unique war medal that was developed for the purpose of awarding those military people as well as civilians who managed to escape enemy lines and drawing the French military authorities. Individuals who left the German Army and joined the French forces were also awarded this medal.

This war medal was developed for civilian prisoners as well as hostages of the Great War and deportees. The civilians that were living in areas which Germany took under its control during World War I were awarded this war medal.