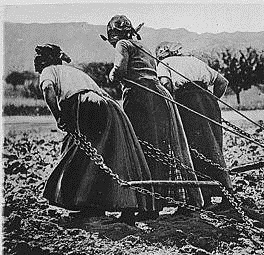 Want to learn more about women in France during World War 1? Read our guide for facts and info on the role of French women in the First World War…

The two words women and war seem absurd when phrased together. However, a sad fact is that war is fought on the bodies of women and children. Women in France in World War I were active members of the community serving their military men and functioning as a vital support structure. The trenches dug through the First World War ran through Northern France and had many of the women in France living in the midst of the War zone and working to support the war activities.

During the war, many tales of women in France World War I were composed by man and women alike. These were based on marraines de guerre, or women who adopted military personnel through correspondence, about nurses in the battlefield or about female spies. Many novels and plays were written in these times including the short lived Becassine, who was a cartoon character depicting a wise fool.
With the exception of this cartoon character reprinted in 1947, none of the stories of French women in World War I have survived into modern times, like the ones focusing on the British and US women whose courage is portrayed in literature and film till today.

Although the Women of France in World War I were actively praised and noted for their part in supporting the country during the war, the records and acknowledgement soon disappeared after the war. It is amazing to note that the 1938 journal of Marguerite Lesage’s focusing on de guerred’une française is impossible to locate in present times.

While it is easy to understand that the tales disappear or are re told to help the war victims understand the aftermath of war and make sense of it all, it is amazing to note the discrepancy in the number of tales circulating about Women from France during World War I in the 1930’s and the lack of them hence forth. Even the official recorded history and preservation of the roles of Women from France in World War I were ignored.

The role of French women in World War I is often over shadowed by the Resistance where the Second World War led to the production of legendary female heroism and they were completely sidelined in the First World War.

The First World War was actually the beginning of women’s emancipation and foray into the mainstream from civil inferiority and domestication. The allies and feminists promoted this view and wanted women to be at par with men in the economic structure in society.
However the women during World War I contributed a great deal to the war but their activities were not acknowledged and their contributions are not recorded. Thus it did not lead to the suffrage rights of women in France or other countries like Britain, Germany or America. It was in fact a result of the Second World War.

WWI actually just accelerated the trends prevalent in the French society, where women were already part of the agricultural and industrial arenas in a large number.