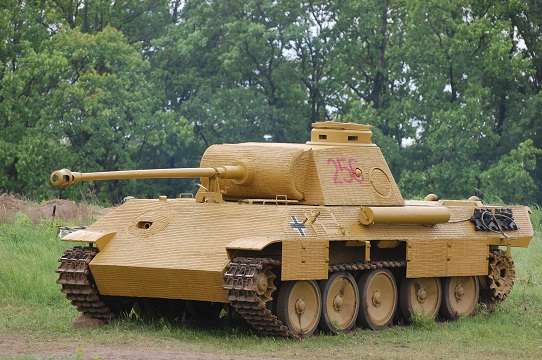 Interested in German made tanks from the Nazi era? For a detailed look at the German Army’s tanks read on…

The German Army tanks can easily qualify as the backbone of the German strategy. After all, why else would the production of various models and types follow in quick succession and be granted immense importance. After having adopted British Colonel John Fuller’s idea, the Germans, or Hitler to be precise, approved the ideas of German officer, Heinz Guderian.

Heinz immediately started work on the production of the ‘Panzerkampfwagen’ or Panzer tank force. This tank force was the one that laid the foundations for the entire contingent of German Army tanks and consisted of the Panzer I, Panzer II, Panzer III and Panzer IV.

Panzer I and II were the ones that introduced the concept of light tanks, weighing 6 and 10 tons respectively. They were extremely nimble and it would seem that they were perfect for the Blitzkrieg attacks carried out by the German Army. However, their light armor and shoddy firepower made sure that this was not the case. With the Panzer I only having two 0.3” coaxial machine guns and the Panzer II a 20 mm main gun and 0.3” machine gun, it did not come as a surprise that the light-weight Panzers were no match for the Soviet tanks.

However, this may now be considered a good thing because it led to the subsequent making of the Panzer III and Panzer IV, the latter being considered one of the best ever tanks. Though these too were medium tanks, weighing 22 and 25 tons respectively, they posed a much greater threat than their predecessors. Though it started off with a 35 mm main gun, the Panzer III was quickly upgraded to a 50 mm gun, resulting in a much more even footing between the Germans and their opposition. This, coupled with the fact that the Panzer IV was soon in production, was a major boost. The fourth Panzer was the main tank of the German forces during World War II, as it had a 75 mm short-barreled main gun, which was later upgraded to long-barreled, and a coaxial and an anti-aircraft machine gun. The armor, too, of the medium members of the Panzer tank force was considerably better than that of the first two Panzers.

Hitler, however, was not satisfied at this. He wanted complex machines that could give the Soviet tanks a run for their money. The wishes of the supreme leader had to be fulfilled and that was done with the production of the Panther. The first of three main German Army heavy tanks, the Panther was a 45-ton tank that was seen as the answer to the Soviet T-34 tank. Its 75 mm main gun and sloping armor were improved upon in the Tiger and King Tiger tanks that were soon introduced into the ranks of German Army tanks. While both boasted the same 88 mm main gun and two machine guns, the Tiger II, which followed the Tiger, had frontal armor 150 mm in thickness and on the whole, is argued to be the best German Army tank.