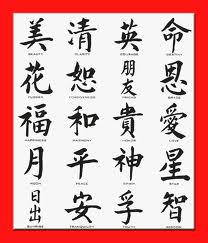 Interested in knowing what meaning lies behind those aesthetically appealing Chinese symbols? Find out as we uncover the true Chinese symbols meanings.

The collection of Chinese symbols consists of an overwhelming number of symbols that goes over the count of eighty thousand. This assortment includes all Chinese characters, signs and alphabets that have been used for thousands of years. With regards to the Chinese symbols per se, their use has become highly restricted in modern times.

Since the Chinese language has evolved over time the use of the symbols has declined. Nonetheless the symbols serve another purpose and that is related to the arts. The physical form of the ancient Chinese symbols seems to have a timeless aesthetic appeal which has earned them world wide acclaim.

When we take a look at China itself we find the presence of Chinese symbols in all walks of life. The cityscape is loaded with Chinese symbols represented through different mediums of art and architecture. Today you will be able to find Chinese symbols on everyday products such as kitchen ware etc. Many people still make use of traditional Chinese symbols for superstitious reasons in Chinese culture.

The meaning behind the form

The construction of Chinese symbols is done in such an artistic manner that they look extremely appealing irrespective of their meaning. But actually each Chinese symbol has a deep and profound meaning behind it along with its traditional use and history.

The Chinese symbol meanings cover a broad spectrum of meanings ranging from the most positive to the extremely negative. The traditional belief is that by incorporating positive Chinese symbols in your life you can expect good thing to come your way. They truly believed that these symbols had the power to attract good fortune.

The validity of this claim is subject to personal opinion and faith. For the Chinese the symbols hold great significance both in terms of their beautiful physical forms as well as their meaning and the consequences that incorporating these symbols into your life can have.

Some popular symbols and their meanings

The ancient Chinese symbol that represents five bats grouped together is one of the most popular motifs known as the five good fortunes. The five elements represent wealth, health, love, longevity and virtue. When used with the color red this symbol is considered to be even more powerful.

Another popular symbol is the sunset symbol which appears in many places in contemporary Chinese society. For the Chinese the sun is the most portent symbol and is also taken as the source of Yang energy.

Believed to energize as well as purify the symbol of the sun is highly revered in Chinese culture due to the profound meaning that it has for them. The same symbol is also meant to represent balance which has been derived from an ancient Chinese legend

The west has become infatuated with Chinese symbols. The majority of the people are however overwhelmed by the aesthetic brilliance of the art form. The magnetic visual appeal has intrigued the people into seeking the meaning behind each symbol which is why we now find more and more people becoming aware of the meanings behind ancient Chinese symbols.