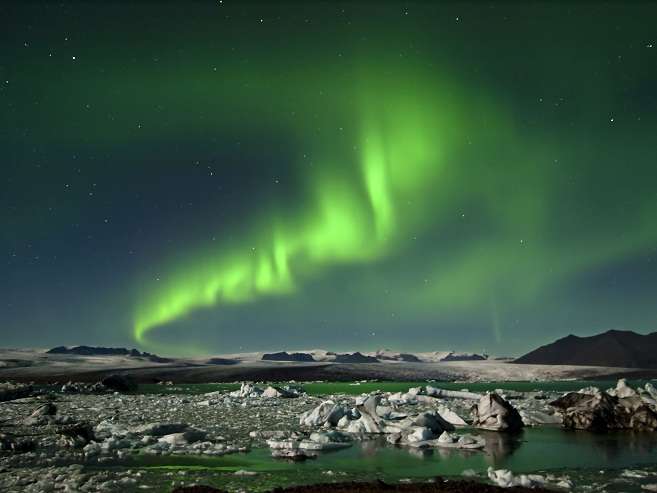 The aurora is a natural light display in the sky, which most frequently occurs in regions near the Arctic Circle. Iceland is situated near the Arctic circle; this makes it a major destination for Northern Lights holidays. Read our guide for more facts & information…

Auroras are formed during magnetic storms. The aurora lights can be different colours, such as orange, purple, red, and probably the most common, green. A green and purple combination may also form. A green aurora can be bright green, with a green lantern-like glow. Some light displays have an eerie, green glow that looks very enchanting.

Purple and green combinations are also spectacular. The purple might somewhat form a background or silhouette to the green streaks. These auroras could make you feel like you’re on the set of some alien sci-fi movie.

The aurora formations can be curtain-like. However, amid some of the horizontal lights, you might see some vertical columns of light. The vertical light columns could form in tornado-like swirls.

An aurora is a natural phenomenon that could be worth taking a picture or recording video of. People from all across the globe come to see the Northern Lights. Northern Lights watchers want a great experience. Factors like a comfy or luxurious viewing location, or a sky full of stars can enhance the experience.

The Northern Lights might occur in a star-dotted sky. A sky full of stars may add more aesthetics to the already magnificent light display in the sky.

Sighting an aurora near a body of water, like a lake or river, may also add to the experience. It could be a spectacular sight to see if the stunning colours reflect on the body of water, and lighten up the water’s surface.

If you’re lucky to be right on the spot of the aurora occurrence, then you might see it brighter and clearer.

Though auroras occur during the day, it is easier to see it at night, as morning auroras appear faint. This is the opposite situation with a rainbow, which is seen clearer during the day, and dimmer at night (and yes, nighttime rainbows do happen).

They say winter is the best time to see auroras; because winter nights are darker, therefore, it can be seen clearer and brighter. However, it has been observed that auroras happen more frequently in spring. Northern Lights holiday goers may hope for dark, clear nights.

Tours may set out by jeep, or bus; from Reykjavik, into the rural areas, to get proper views of the Northern Lights. Currently, it is not possible to predict auroras; as the science to do so is limited; but many locals say in about 3-4 hours an aurora could be spotted.

Aurora searching tours rely significantly on weather conditions; so bad weather, which doesn’t facilitate proper aurora viewing, may cause a day’s journey to be canceled.

The Setting of the Northern Lights Holiday

Iceland’s landscape provides a great setting for a Northern Lights holiday. A destination for Northern Lights viewing could be the countryside. You might see the magnificent light displays over the flat, treeless open meadows, and plateaus and cliffs blanketed with snow. You could spot the northern lights over a snowy glacier landscape, or you might see the lights brighten up the sky over a dark and barren lava field.