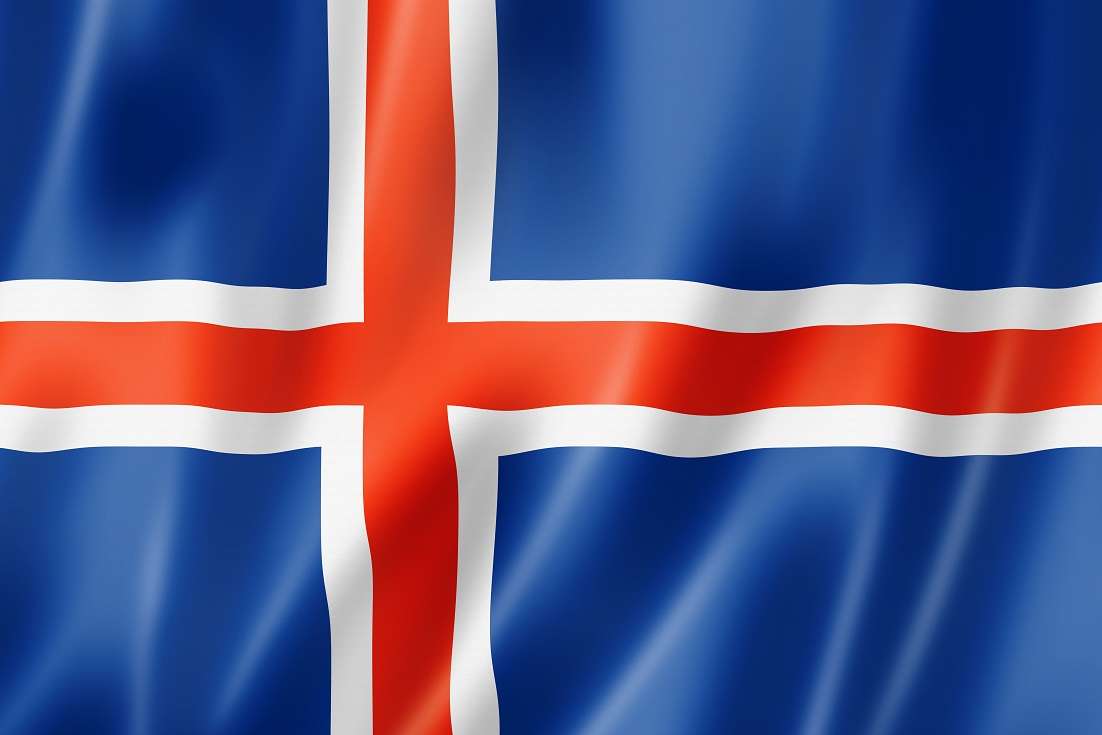 The most recent flag of Iceland was adopted in 1944 and Iceland holds national flag days to celebrate the flag and everything Icelandic!

Iceland became an Independent Republic in 1944 and, on June 17th of that year, the Flag of Iceland was adopted in law although had been official since 1915. The Flag contains the traditional colours of Iceland, blue and white. The blue in the National Flag of Iceland was initially known as ‘sky blue’ and referred to the tone ultramarine which is paler than it is today. It was after 1944 when the blue in the Iceland Flag became darker and the ‘sky blue’ was dropped.

The Iceland Flag itself has the blue background on which is has a fiery red cross bordered by a snow white cross. These colours reflect the particular elements of Iceland with the blue representing the mountains, the white representing the ice and the red reflecting the fiery, active volcanoes of Iceland.

The Flag of Iceland went through many changes before the flag of today was brought into being. There was much disagreement in Iceland as to what should go on the flag. Some wanted a silver falcon on a blue background but others thought a falcon on the flag was not in accordance with Iceland traditions. Some felt the historical three stockfish should remain on the flag.  Many just wanted the white Nordic cross with the sky blue background to become the official Iceland Flag.

Iceland achieved home rule in 1903 and, in 1913 King Christian X proclaimed that Iceland could fly their own flag on land and in territorial waters. The King however, specified that the design on the flag of Iceland was to be decided by royal decree. He refused to recognise the blue and white cross flag widely adopted by the people of Iceland.

In the June of 1913 uproar was caused when a young man of Iceland was arrested by the Danish Coast Guard rowing his boat in Rykjavik harbour flying the blue and white Iceland flag. The anger this provoked in the people of Iceland resulted in a sea of blue and white Icelandic flags appearing on the streets in protest.  An urgent meeting was summonsed when a resolution for an official flag of Iceland was called for.  The Danish authorities did not agree with the adoption of the blue and white flag of Iceland as the King thought it to be too similar to the royal flag of Greece.

It was in 1915 that the final decision was made for the current Iceland flag with the white bordered red cross on a blue background.

Nationally sanctioned flag days were agreed in law in Iceland in 1991 when it was decreed that the flag should be fully drawn on all official buildings in Iceland, except on Good Friday when the flag is to be flown at half mast.