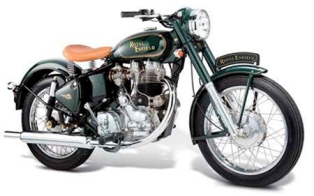 Royal Enfield is the oldest motorcycle model in the world that is still in production. The company originated in Redditch, Worcestershire and was dissolved in 1971, but production in India continues to this day. The 1963 Royal Enfield Indian Motorcyc

While Royal Enfield was most famous for its production of motorcycles, it made numerous other things, like rifle parts, lawnmowers, and bicycles. Their logo was a picture of a cannon with the motto “Made like a gun, goes like a bullet.” By 1955, Enfield of India began manufacturing Bullet motorcycles under a licensing agreement with the UK brand, and by 1962 they were making complete bikes. Even when Royal Enfield dissolved in 1971, the Indian company, in Chennai continued production and bought the rights to the name “Royal Enfield” in 1995. They’re still in business as of 2009.

1950 was a crucial year for the Indian Motorcycle Company in America. A company called Brockhouse Corporation had been helping finance the faltering Indian company, and bought it outright in 1950. Some unfortunate management decisions led to Indian being split into two halves: one for sales, and the other for manufacturing. The manufacturing arm could not meet the retooling costs for an overhead valve engine, and it closed in 1953. Some Indian purists consider that to be the end of the “real” Indian motorcycles. But the sales arm of the company did not fold.

Since Brockhouse Corproation had the rights to the name after Indian manufacturing went under, they began importing Enfields and selling them as Indians from 1955 to 1970. This was an early example of “badge engineering,” and it was not successful. Though dealerships still carried the Matchless/Indian name after 1959, the Indian name was dropped from motorcycles.

It was during this period of Indian Motorcycle history that disputes about who owned the rights to the brand name began germinating. The Enfield Chief was still being sold in 1960 – a rebadged Enfield 700 cc twin fitted with the fender guards, saddlebags, and other Indian paraphernalia. But Associated Motorcycles of Britain bought the Indian name in 1960. It was in 1963 that the U.S. distributorship of Associated Motorcycles was taken over by the Berliner Motor Corporation, and all traces of the Indian name were quietly retired for good. The details of this deal took on a life of their own in the form of trademark and branding disputes that lasted until 1999.

But in the mid 60s, the sales arm of the Indian company was obtained by Floyd Clymer, a racer, author, motorcycle dealer, and magazine publisher. Clymer spent the last five or so years of his life trying to resuscitate the Indian brand, by fitting Indian nameplates to Italian Velocette-based bikes, and even having a prototype built based on the original Indian V-Twin design. Though well received, sadly, the prototype was the only one ever made.