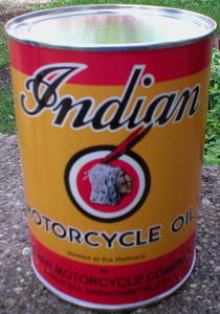 The Indian Motorcycle oil can was a common sight in the 1940s. With Indian enjoying great success in supplying the military with motorcycles, the brand was prominent. And with wartime rationing, those cans of oil were vital for people with Indian m

Signs for the Indian Motorcycle Oil Can read, “Indian” in the trademark script, then underneath, “MOTORCYCLE OIL.” The next line reads “Sealed at the Factory,” then “for” and finally “INDIAN MOTORCYCLE COMPANY” with Springfield, Massachusetts, U.S.A. at the bottom. Done up in vivid reds and yellows, this popular early 20th century sign has been lovingly reproduced by licensed sign vendors.

In 2003, soon before the demise of the Indian Motorcycle Company of Gilroy, California, replica signs in the original half-cylinder shape were commissioned. The shape stands out from the wall, so it looks even more like the original oil can, and the shape allows a light to be placed inside the half cylinder to create a wall sconce. Measuring over 12 x 20 inches, these were made in limited quantities, and it is unknown if they will be made again by the latest incarnation of the Indian Motorcycle Company.

The Indian Motorcycle Oil can was also made into other commemorative items during its early 20th century heyday. For example, you can occasionally find a thermometer mounted on a heavy wood Indian Motorcycle Company Oil sign. These are actually really nice thermometers, at nearly 2 feet tall they are easier to read than a lot of modern thermometers. The oil can shape, like on the sign described above, protrudes from the wood.

On rare occasions, you can find an actual quart of oil from Indian Motorcycle that someone bought in the 1950s and kept ever since for whatever reason. Even if they have a little rust on them, however, they can fetch over $200 at auction.

Memorabilia from the 1940s, including the Indian Motorcycle oil can or oil can ads, are very much in demand today, as interest strengthens in what Tom Brokaw called “The Greatest Generation.” In a decade dominated by war, America pulled itself out of the Great Depression, and women went to work in factories replacing the men that had gone to Europe or the Pacific theater. Food was rationed, clothes were mended and reused and handed down, and the true greatness of the American spirit became readily apparent. Women on the home front were even cleverly creative with their hairstyles, to make up for the fact that new clothing was rationed. It’s no wonder that artifacts from the 1940s are so beloved, and vintage Indian Motorcycle signs and oil cans are two very important examples of those artifacts.