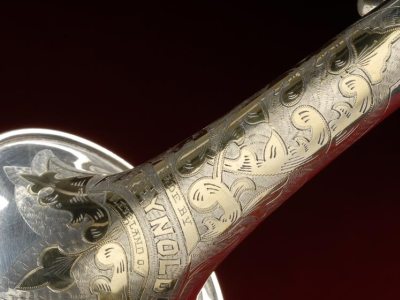 The Reynolds French horns are the best amongst the vintage collection. Read our guide for more facts and information…

F.A. Reynolds Horns have a long and interesting history. Reynolds’ first double horns are presumed to be based on the Conn 8D which came out in the 1930s. The popularity of that model led Reynolds to develop his own double horn. Later in 1950 the Reynolds horns were rebranded and became known as the ‘Contempora’. All Reynolds instruments made after the early 197os were engraved with ‘Made in USA’.

The Reynolds French horns are the perfect addition to any cherished collection of horns.  The horns that were introduced from 1936 to 1949 were amongst the most popular horns of that the company developed.

The Reynolds double French horn had B flat and F keys, 0.472″ bore and the bell was 12″ inches. The wrap was made similar to the modified Kruspe Horner which came with a B tuning slide. It had a clear lacquer finish, made from brass and nickel silver tubes.

Other Reynolds double French horns came with USAAD military engraving and in a silver plate finish. The majority of the Reynolds horn of this time came with similar specifications with some minor changes. Some came with three rotor valves, made from brass and had nickel silver bracing. Other were developed with three piston valves and additional D and Eb crooks.

Even though the Reynolds was really popular at one time, today many musicians do not recommend purchasing them. There a few reasons for this.

First the Reynolds French horns have a large bore than other horns which often makes the horn difficult to control. This will mean that experienced players are likely to benefit from the horn.

There are many students and beginners on a tight budget where they can’t afford to buy the high end brands and may opt for Reynolds horns. However they should remember that these horns are very old and may require frequent repairing which may add to their ongoing maintenance cost.

So if you are a collector or an experienced player then you should go forth and purchase a Reynolds double French horn. But if you are a beginner it may be a better idea to purchase a latest brand or a slightly used brand for greater ease and convenience.