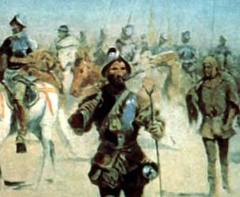 Looking for information on Coronado the Spanish explorer? Want to know about the life and adventures of Coronado? Our guide gives you the facts & information you want to know.

Francisco Vasquez de Coronado was a Spanish conquistador and explorer. He was born in Slamanca, Spain in 1510. His exploration visits included New Mexico and the southwest part of present day United States. His exploration exploits lasted between 1540 and 1542.

Francisco was governor of New Galicia, Mexico when he sent Estevanico and Friar Marcos de Niza on an expedition to the north towards New Mexico. Marcos de Niza returned with head spinning tales of Cibola, a wealthy golden city. Coronado was thus appointed leader of an expedition of Spanish explorers to seek out the 7 cities of gold with Cibola included. In 1540 Coronado’s Spanish explorers set out with 335 Spaniards, 4 monks, 1,300 Mexican Indian allies and a number of slaves and a large herd of about 1,500 horses.

His route took him through the coast of the Sea of Cortez towards Sonora. Upstream, he crossed the Gila to Cibola, west of present day New Mexico. The Cibola he saw was nothing as he expected nor was it as Marcos had described. It was a simple settlement of Zuni Indians; Marcos went back home to Mexico in disgrace. Coronado still went ahead to capture Cibola and made an exploration to the other six Zuni Indian pueblos. He sent other Spanish explorers to explore other areas around. Among such explorers was Pedro de Tovar who was sent northeast and became the first European to see the Grand Canyon. Coronado the Spanish explorer set up his winter camp among some villages east, around the Rio Grande. During the winter of 1540-41, his army continued to have conflicts with the Indians of the Rio Grande and this lead to the Tiguex War which culminated in the destruction of the Tiguex peublos and the death of a lot of Indians.

Coronado was later to meet an Indian who he called the ‘the Turk’. The Turk told him about another rich country northwest called Quivira. He crossed the present day Texas Panhandle going north. Believing that the Turk was deceiving him about the route he had him executed and took other guides to lead him to Quivira. His journey ended at present day Lindsborg, Kansas and there he met no riches or gold but disappointment. He went back to his winter camp at Tiguex and spent another winter.

In 1542 he returned home to Mexico using the same route he left but had only 100 of his men with him. His expedition was considered a total failure since he failed to achieve the main aim which was to discover gold or treasure. He remained as governor of New Galicia until he retired in 1544 before moving to Mexico City where he finally died. There is a hill named after Fransisco Vasquez Coronado in honor of the Coronado Spanish explorer and his expedition. It is called Coronado heights and is situated near Lindsborg.