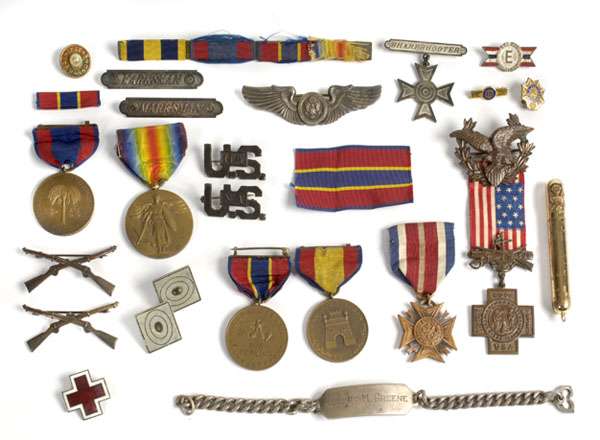 It is easy to identify information and background details of a Spanish-American War medal if an identifiable rim number is available for the medal. Using this information you can get details about the original receipt, including the name of the person who was awarded the medal and their home state and rank, as well as their unit number.

The rim number can also be utilized for the Sampson medal allowing one to verify the name of the ship as well as the rank of the person awarded the medal. However, the rim numbers on state-issued medals are untraceable.

Issued by the United States government, The Spanish Campaign Navy Service medal was presented to all the members of the U.S. Navy in the year 1908 during the service at sea.

It was awarded for the service in Puerto Rican or Cuban waters for service during May 1, 1898 until August 16, 1898. During the 1920s the same medal was also awarded to members of the United States Navy who served at sea around the waters of the Philippines as well as Guam.

The date is printed at the bottom and in this case is the year 1898. The center has an image of a coastal Spanish Fort as the symbol of war which may represent the Havana Morro Castle. Underneath the fortification image is a stack of cannonballs.

The reverse side of the medal has the statement “United States Navy” printed on the top in an arc. The center bears the image of an eagle which is based on an anchor.  At the bottom are the words “For Service” which are finished with two different types of leaves.

The leaves towards the right signified peace as they are olive leaves whereas those on the left are oak leaves and signify strength. Originally the medal had a ribbon in the colors of the Spanish flag. However, these were later replaced with new ribbons.

Issued by the United States government to all the members in the US Marine Corps, The Spanish Campaign Marine Service medal was awarded to those who served in Cuba, the Philippines, Guam or at sea during the time frame of May 1 1898 and August 16, 1898. It is very similar to the Spanish Campaign Navy service medal in terms of its structure.

Issued by the US government in early January of 1905, the Spanish Campaign Army Service medal was presented to those members who served en route at sea or on ground in Puerto Rico, Cuba and the Philippines. It has the text “War with Spain” in an arc on the top of the medal. Whereas the year 1898 is mentioned at the bottom.
The image of a Blockhouse is in the center and there is the stalk of tobacco on the left whereas a stalk of sugar cane is on the right. The ribbon follows the same yellow and blue as the Navy and Marine medals.

At the back the statement “United States Army” is printed in an arc on the top, whereas at the bottom you have the words “For Service” with 13 stars printed on it. There is an eagle in the center sitting on a shield along with a barrel of cannons and a collection of anchors.